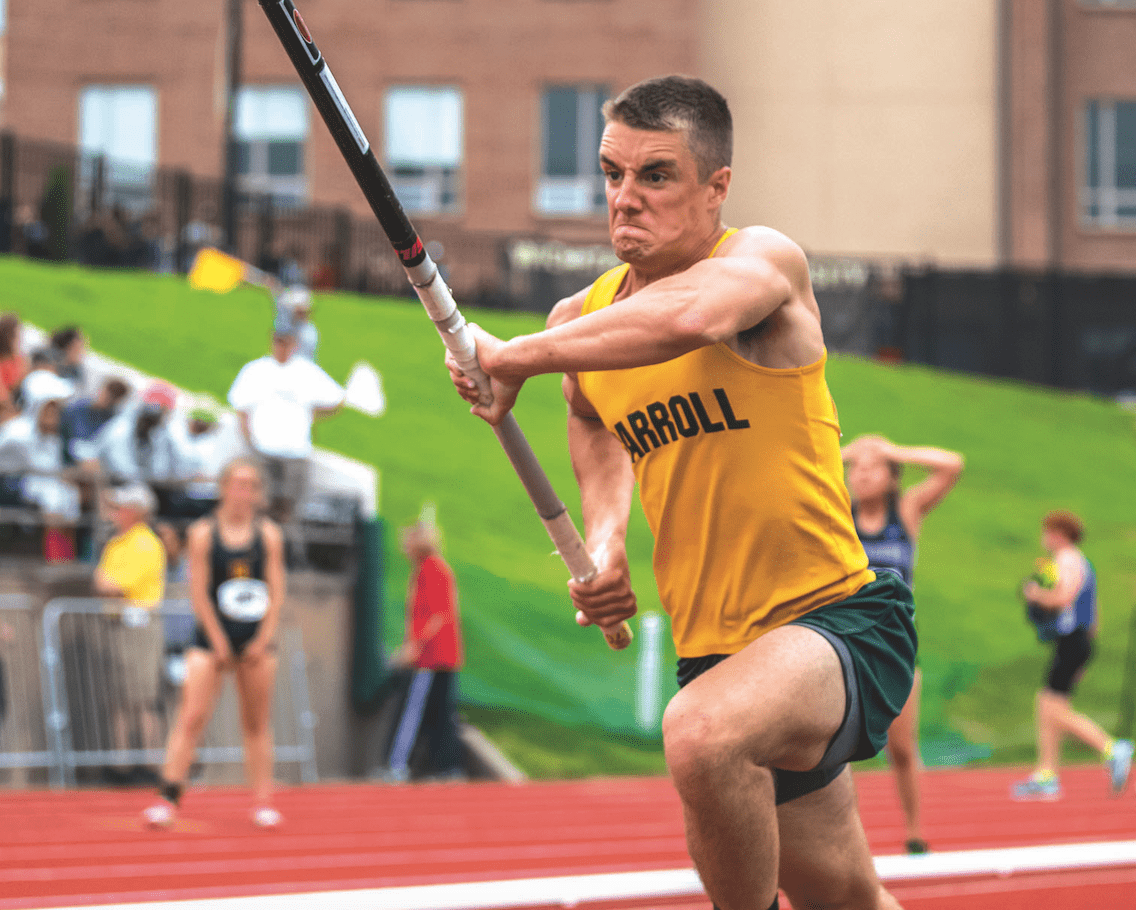 For Bishop Carroll senior pole vaulter Ethan Hull, who won his second straight Class 5A title on May 25, leadership comes easily. Put him in a leadership role, and it’s as if he was destined for that spot.

“It just feels right,” said Hull, who received an appointment to West Point.

But the week of state track, Hull didn’t show up for the pool workout on Monday and only did two jumps the next day.

“I went through the whole year with my teammates knowing that I was the top dog,” Hull said. After junior Brian Simon beat him at regionals by going 16-4, “it just really brought me down, humbled me. I didn’t handle it well at all. It wasn’t a good time for me.”

“I told him, ‘I get it, but you’re still the leader of this group.’” Fraizer said. “‘You’ve got to quit thinking about how you feel. If you’re not checked in, you still have to be that guy. You can’t let them know you’re scared or down. You’ve got to face it if you’re leading people.’”

Hull responded by sitting down with his teammates and apologizing.

The pole vault community is a tight one, whether it’s just Bishop Carroll, the City League or …. any pole vaulters. Most of them know each other and work out with each other in the offseason.

“Our relationship is a big part of it,” Simon said. “We’re constantly there pushing each other to the next level. If it wasn’t for them, I don’t know how many practices I would have gone to. I do a lot of offseason work with these guys, and that has pushed me to the next level.”

Hull won 5A in 2018, while teammate Augustine McCormick finished second.

“It’s not what we wanted, but it’s not far off,” McCormick said of his finish. “It’s still points to the team. It’s still a contribution to the team championship.”

Carroll won its second straight 5A title and third since 2014.

As for Simon, he was confident heading into state. He hit his personal record at regionals when he smashed his previous best of 15-6 by going 16-4.

“It was really just a whole lot of different factors coming into play,” Simon said. “It finally clicked. I had done so much work in the offseason, and I was ready for that vault. It was waiting for everything to click together — the conditioning, the form. I was honestly surprised when I jumped, but I knew I had it in me.”

And yet, he was nervous at state because in 2018, he no-heighted.

“I was really, really disappointed,” he said. “It really did hurt. … It was a rather emotional time. All I had to do was clear the opening bar and I was probably top four, top three.”

So once he got over his first height this year, he was good to go.

Neither Hull nor Simon missed at 15 or 14 feet, but both missed all three attempts at 15-6.

And they had to go into a jumpoff to determine the winner.

With the Cessna Stadium crowd watching and clapping, they each made 15-6 on their next vault and had one attempt each at 15-9. Both were successful.

“It was definitely more intense,” Simon said. “I wanted the state championship as much as Ethan did. He put all the pressure on me. I’d see him clear the bars. I had to clear it. … It was definitely really intense.”

“It was really stressful, and I couldn’t have asked for anything cooler than that,” Hull said.

“I couldn’t have gotten 16 without Brian jumping next to me. I came into the meet knowing he had a better PR than me. He had the opportunity to beat me and take the title. Having him jump the same heights as me, knowing I had to beat him to come out on top.

“He was talking to me the whole time, really pushing me. I couldn’t ask for a better teammate.”

The multiple delays in state track forced it to finish on Sunday for the first time in its history.

For Wichita South senior Deron Dudley, it was especially rough. While he won the 100 meters in 10.61 on May 25, another delay shortly before the 6A 200 meters meant he had to run on Sunday.

“It went on and on and on. It was not good,” said Dudley, who signed to run at High Point. “We were in focus mode, then we couldn’t run. Then back in focus mode. It wasn’t good for the mind and body.”