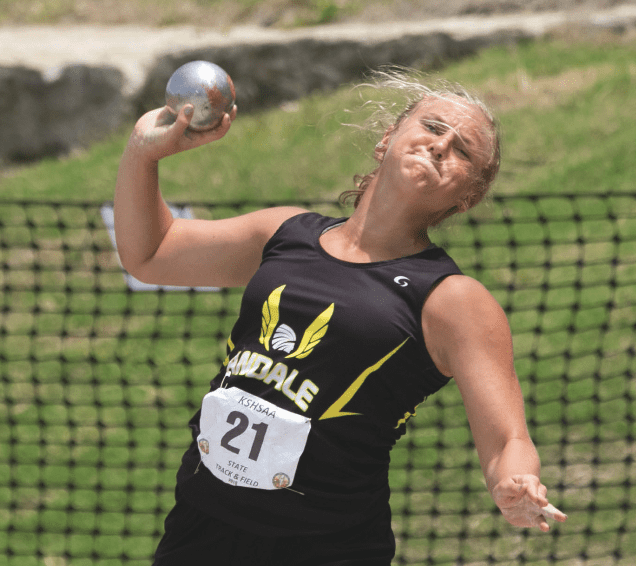 While Andale senior Jacy Anderson’s love for discus was sparked in middle school, within a year, she contemplated quitting.

“She has had to work her butt off more than anyone else. She’s a kid who puts time in during the offseason, she takes the discus home, she throws wherever she gets a chance.”

Anderson won the Class 4A discus in May after two straight runner-up finishes.

While Anderson has an excellent work ethic, that’s how it is with the Indians’ throwers. They’re usually some of the last athletes to leave practice.

Anderson isn’t alone in her success, either.

Teammate Katelyn Fairchild, a sophomore, won the javelin with a throw of 145-9 and took third in the shot put. Sophomore Samantha Marx took second in the javelin.

“We put in as much time as we can,” Fairchild said. “If it’s rainy, we go in the gym and put in tons of reps.”

What sets these throwers apart is their offseason work.

“Even just a few throw sessions in the summer, fall and then in winter time working drill stuff on their own – that helps,” Spexarth said. “It’s all stuff that we tell them.”

They also have natural talent.

“Katelyn is a hell of an athlete with a great arm,” Spexarth said. “She can move her feet really well. It’s hard to remember that Katelyn and Sam are just sophomores.”

Fairchild qualified in all javelin, discus and shot put as a freshman, finishing fourth in javelin.

“We knew this year would be better,” Spexarth said.

Javelin is the main event for Marx, although she had the No. 5 discus in 4A – but the top four discus throwers were all in Andale’s regional.

“In javelin, she’s a stud,” Spexarth said. “The school record was 150, and we have two sophomores, and one has broken it and Sam is knocking on the door.”

Track is important to Marx.

“When it’s not track season, I want it to be track season,” Marx said. “I want to be out there and go and throw.”

There’s a family mentality among the throwers that goes beyond the fact that there are siblings and cousins – Katelyn Fairchild’s brother, Mason, is a senior who took second in the shot put and third in javelin, while their cousins are Devin and Samantha Marx. Devin Marx finished fourth in the javelin.

“It’s basically like having another brother and sister out there – we are helping each other compete harder,” said Devin Marx, who joined the track team as a junior after playing baseball for two years. He signed to throw at Hutchinson Community College.

Because at Andale, it’s all about team.

Former coach Greg Smarsh emphasized the team concept in what is a highly individualized sport. Coach Tyler Ryan has continued that focus.

It paid off as Andale swept the boys and girls team titles for the fourth time since 2013. The boys also won the team title in 2015.

When Mason Fairchild took second in the shot put, he held up four fingers. The significance? It was the point differential that his finish helped the Indians with in the team race.

“We all have it in our heads, not that we’re going to get first or second but that ‘I’m going to score eight points, score 10 points and eventually we’ll get that plaque,” he said.

But Mason Fairchild, who signed to play football at Kansas, considered quitting javelin because a shoulder injury from the fall limited him early and he threw a 128 in his first javelin competition.

“I thought I was done after that first meet,” he said. “I got fourth or fifth out of just Andale throwers in javelin. I was doubting myself big time.”

He put in the work, making incremental progress. In a week, he was up to 140 and just kept going forward. He threw 193-6 at state.

Andale had another focus this track season, too. In December, after Paul “Bear” Schmidt’s funeral, the team dedicated the season to their former throws coach.

Schmidt was the Andale track coach for 42 years and coached throws through the 2018 season. He died on Dec. 18.

“To actually be able to win state for him, I thought that was really cool,” Devin Marx said.

For Anderson, it was especially personal to dedicate the season to Schmidt. She kept his memory close, writing ‘Bear’ on her throwing shoes.

“It’s so emotional,” Anderson said before pausing. “He meant so much to me. It was really hard to see him go. He was always willing to work with me. He was excited when I’d do something good.

“My first throw at state, I could hear him saying in my head, ‘well, that wasn’t very good.’ He was so kind and he knew his stuff.”

Anderson and Kaitlyn Fairchild went to visit Schmidt the night before he died.

“He talked to us about how he wanted to win another state championship,” Anderson said.

It wasn’t easy dealing with the delays at state track, which extended to Sunday for the first time in history. Class 4A, 5A and 6A didn’t get to compete on Friday because of the weather.

Augusta senior Abbee Rhodes, who signed to throw at Texas Tech, won the Class 4A shot put with a 41-3, but her personal record is 45-2. She also took second in the discus.

“At a stage like that, distance isn’t as much as a concern as finishing on top,” Rhodes said. “Discus didn’t turn out like I wanted to, but I’m still happy with the way I was able to compete with the madness.”

As the track organizers struggled to keep everything moving, the athletes had to adjust.

Rhodes only had three warmup throws in discus, when she usually has 10-15 minutes to get in as many as she can.

“In shot put, they were trying to get it done as fast as possible, so we had to pay attention and figure out who was throwing and who was next,” she said. “We were trying to look up to our coaches about what we’re trying to do, and they’re looking at us the same.”