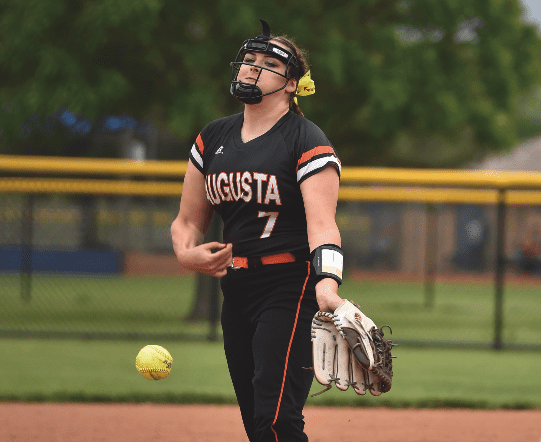 Augusta softball expected to win the Class 4A title.

“For the three seniors … we talked about it multiple times that this is something that’s going to happen,” said senior outfielder Bailey Pennycuff of herself, pitcher Gracie Johnston and Kortney Divine. “There was no question. We had to ask, ‘what was going to stop us?’

“All I really know is we get on Gracie’s back and she carries us as far as she possibly can.”

Augusta beat Andale/Garden Plain 5-2 to win the 4A championship, finishing with a 24-1 record. Johnston had 41 strikeouts in three 4A tourney games.

Augusta and Andale/Garden Plain split in their regular-season doubleheader.

“She was dominating,” Augusta coach Jamie VanDever said of Johnston. “And she has been all year long. We got clutch hits when we needed it and defense was solid behind her. We can win with this team in a variety of ways.”

But there’s no doubt the Orioles start with Johnston.

“She really owns the mound,” Pennycuff said. “She owns every single batter she faces. She’s not really a ground ball pitcher. She goes for the strikeout – she had 198 strikeouts on the season.”

Johnston’s go-to is her rise ball.

Johnston started pitching with her sister, Sophie, a junior, about 10 years ago. During pitching workouts, they caught for the other until Sophie was 10. That’s when Sophie went to catching only.

While Gracie controls opponents from the mound, it’s Sophie who controls the game from behind the plate.

“From where I’m at, I can see everything that’s going on,” said Sophie, who calls all pitches. “I can watch the batters closely, where they are setting up, their swings when they are warming up. I’m really good at memorizing faces, and I can match the faces with the pitches I call because I’ve learned what they like to hit and where they like us to throw the ball so we can pitch around them.”

The sisters have that familial connection that allows for unspoken communication.

Of course, they’re also known for their loudly spoken communication.

“We always keep each other in check, and sometimes that may be calling each other out,” Gracie said. “… She always knows how to calm me down, even when I don’t want to be talked to.”

Their connection was a key to the Orioles’ run to the state title game. And in the championship, when Gracie struck out nine Andale players, it started with the Johnstons.

But there’s no doubt that both Johnstons deflect to the importance of their teammates.

“We played well together as a team,” Gracie said. “We hit the ball like we are supposed to, made the plays we need to make behind me.”

VanDever added: “This is such a hard-working, deserving bunch of kids. It’s an honor and pleasure to get to work with them every day. It’s not always pretty. But they were destined to be great from the very beginning.”

Derby qualified for the 6A tournament for the ninth straight time, the longest streak in 6A.

The Panthers also won a first-round game for the first time since 2013 and finished tied for third. The third-place games were canceled due to weather.

In the semifinal loss, Derby struggled with hitting in runners.

Bishop Carroll ended Shawnee Heights’ 66-game winning streak during the regular season, which was an important victory going into the Class 5A title game.

“And we didn’t. That was really disappointing because this was a great group, a fun group.”

Reagan Smith led Carroll on the mound, while Izzy Marcotte and Gabby Eck were key defensive players at third base and shortstop.

Maize South and Goddard tied for third in 5A after the game was canceled due to the weather.

“Our goal was to go all the way and win everything,” Maize South coach Mike Tinich said. “But I felt we went out and we played a good game and we challenged the best team in the state and had a chance to win there at the end, had a chance to come back at the end. We fell a little short.”

Maize South lost 8-3 to Shawnee Heights in the semifinals.

“From the bottom to the top, we had girls who stepped up on any given night,” Tinich said. “Our seniors leaders with Lauren (Johnson) out there in center field, and just the athlete that she is, she can making anything happen offensively or defensively. Ashlie Thissen on the mound was phenomenal. And Alyssa Kerr really had, not a breakout year, because she’s been a good, solid player for us. But you could see her confidence getting stronger more and more.”

Goddard advanced to the 5A tournament for the third time in four seasons.

“It was disappointing that we didn’t get to play to end on a winning note instead of a losing one,” coach Rita Smith said. “We had five seniors, and they were a close-knit group. That was neat to see they finished their career at Goddard by getting another banner to hang.”

Sophomore pitcher Kendal LeGrand, who missed most of her freshman season with a broken hand, pitched the Lions’ final four games.

Senior third baseman Gentry Shepherd hit over .500 and had eight home runs, including one against Wichita Northwest in the first game of the 5A tournament.

That Andale/Garden Plain had only one senior – Macie Eck, who signed to play at Notre Dame – takes some of the sting away from its 5-2 loss to Augusta in the Class 4A title game.

But Andale/Garden Plain, which finished at 23-2 with its only losses to Augusta, didn’t play the fundamentally strong softball the Indians are used to.

“Defensively we uncharacteristically didn’t play well,” Schrader said. “We had two, three mistakes that were really costly. We’re pretty young; it could have been nerves.”

Rose Hill (17-8) finished fourth after a strong finish to the regular season.

Hutchinson Trinity Catholic’s trip to the Class 2-1A softball tournament was its first since 2005, the first year of the program.

So it was a big deal when Trinity finished third.

“Our kids were really excited about coming home with a trophy,” coach Joe Palacioz said. “They don’t put state appearances up on the banner (in the school) unless you take first, second or third. I told them – ‘put your mark up there. This is what you’re playing for.’”

Trinity isn’t a team with offensive power. It won with good pitching, solid defense and the ability to manufacture runs.

“We play the small-ball game really well,” Palacioz said. “We are smart and aggressive on the bases. We seem to catch teams off guard because we slap a lot, bunt a lot, take extra bases.

“Our pitching will keep us in a game, so if we can scratch out some runs, we’ll be OK.”

In the third-place game, Trinity jumped out to a big lead on Jayhawk-Linn and then hand to hang on.