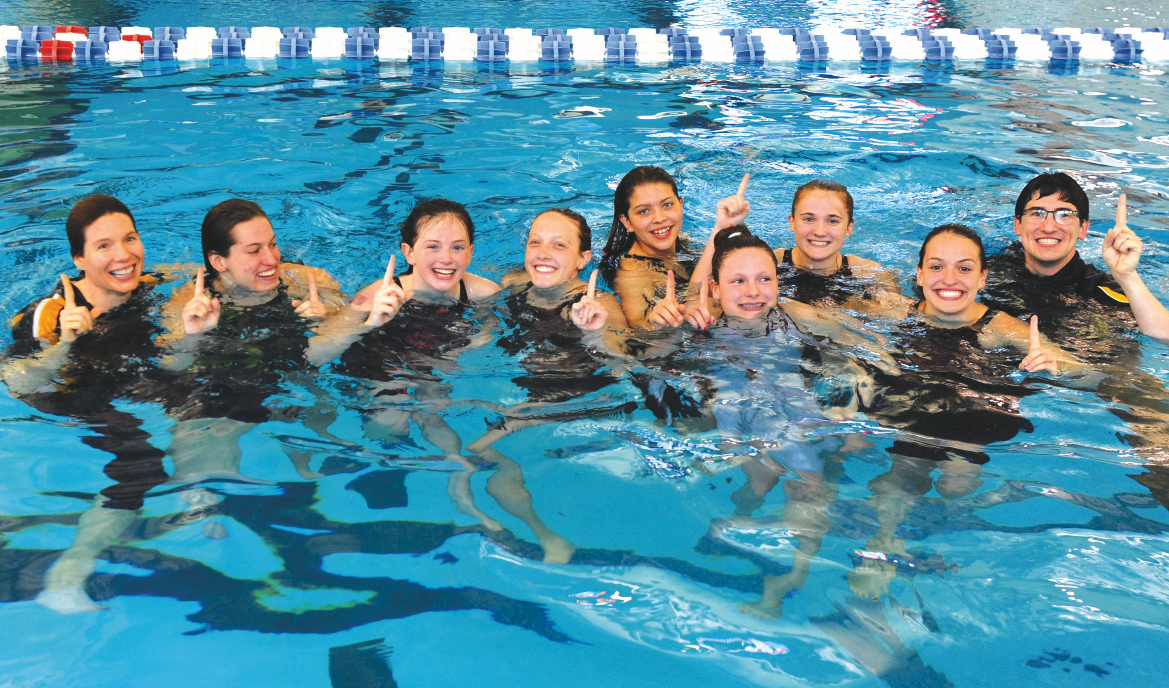 TOPEKA – With only seven girls making up its state contingent, the numbers certainly didn’t favor Bishop Carroll in its quest to bring home the first the program’s first state swimming championship for the Class 5-1A meet in Topeka.

Titles typically are won by programs that simply overwhelm the competition with body after body.

Whatever the Golden Eagles lacked in quantity, however, they more than made up in quality. And when senior Sydney Schmidt stepped onto the starting blocks for the 400-yard freestyle relay for the final race of the meet, Carroll was in position to make the dream a reality.

“I was just thinking, ‘Man, it comes down to this one race,” Schmidt said. “So I had to give it

Trailing rival Kapaun Mt. Carmel by one point, Carroll left no doubt. Schmidt, a double-individual state champion in the freestyle sprints, staked the relay to a four-second lead on her leg and her teammates did the rest.

Carroll won the race by a whopping 10 seconds, putting an emphatic finish on the state

championship. The Golden Eagles finished with 291 points, topping Kapaun by seven points for the crown.

“I’m a lot happier this go-around with the team winning than I’ve ever been as an individual,” said Schmidt, who won two individual golds for the second straight year. “It’s so much more fun seeing everyone else happy and excited too. It makes me even happier that I was able to do this with everyone else.”

And this from a swimmer who found an immense sense of joy and accomplishment when she captured state titles in the 50 freestyle and 100 butterfly last year as a junior.

Those championships were the first of her career and marked a major comeback of sorts. In taking fifth in the 50 free and second in the 100 butterfly as a sophomore in 2017, Schmidt overcame an inflamed IT band on her right knee that was causing her so much pain she nearly came to a decision she never thought she’d even consider.

“I hurt my knee a few weeks before state and after state, I honestly thought about quitting,” Schmidt said after last year’s state meet. “It was really painful to swim. But I just love it and I didn’t really want to walk away from it injured. I wanted to keep going and keep trying.”

The perseverance delivered last year’s titles and two more in 2019. Schmidt successfully defended her title in the 50 freestyle, holding off Andover Natalie Neugent by .27 seconds to win in 23.78. The finish was a tad bittersweet, however, as she fell just .02 seconds short of breaking the state-meet record in the event, a 23.77 set by Winfield’s Kathy Echiverri in 1998.

“I’ve been shooting for it all season,” she said. “So I was a little disappointed in not getting it. But oh well, it’s just one thing and it was still a great season.”

Schmidt opted to go after the 100 freestyle title this year instead of defending her butterfly title and had no trouble doubling her gold-medal pleasure again. She won in 51.96 seconds with Neugent runner-up again in 52.51.

Schmidt also teamed with Alexis Webb, Lexie Shelton and Zoe Winter to finish the meet in convincing fashion, winning the 400 freestyle relay in 3:35.29, 10 seconds ahead of Trinity Academy. For her efforts, Schmidt was named co-athlete of the meet along with Topeka West’s Kadence Jeffries, who won the 200 and 500 freestyles as a freshman.

“It just feels great to think I might have quit and not had this opportunity, it’s amazing to know I could come back from that,” Schmidt said. “Just being here now and being to celebrate with my teammates makes it all worth it.”

Winter and Shelton also joined Schmidt with titles in individual events. Winter enjoyed a dominating state debut, cruising unchallenged to titles in the 200 individual medley and 100 butterfly. Winter won the 200 IM by nearly seven seconds in 2:05.81 and took over for Schmidt as the 100 fly champion with a win in 57.71.

“Coming in, I was really nervous,” Winter said. “I just kind of swam it. It took a lot of work in practice to get this. But I came here to swim for the team. That was my No. 1 goal.”

Shelton wasn’t able to defend the 500 title she won a year ago, finishing a distant second to Jeffries, whose time of 5:05.62 was three seconds better than Shelton’s 5:08.81. But the junior came back to win the 100 breaststroke, upsetting defending champion Jesse Paxton of Aquinas to win by .27 seconds in 1:06.29 after losing to Paxton by .08 seconds in last year’s finals.

Winter and Shelton teamed with Natalee Clark and Lexie Biby to open the meet with a victory in the 200 medley relay, winning by two seconds in 1:49.35. The 200 freestyle relay fell just short of making it a Carroll sweep of the relays, with the foursome of Biby, Webb, Schmidt and Rachel Bailey taking second to Aquinas by a second.

Wichita Trinity Academy freshman Lexie Weatherford won a thrilling battle with Blue Valley Southwest’s Sarah Graven for the title in the 100 backstroke. After edging Graven by .03 seconds for the top qualifying time,

She also added a third in the 100 butterfly.

Kapaun’s bid for a team title fell short in the final race for the second straight year. The Crusaders title pursuit was highlighted by a runner-up finish from Claire Conover in the 200 IM and thirds from all three relays, Conover in the 10 breaststroke, Olivia Orth in the 200 freestyle and Sydney Le in the 100 backstroke.

Class 6A – Wichita East’s Astrid Dirzwager continued her reign in the 100 backstroke, winning the state title for the third straight year.

There’s certainly no shortage of motivation to maintain her position as the state’s top swimmer in the event. She only needs to show up at practice every day to find the competition to keep her on top of her game.

Teammates Katerina Savvides and Baylor McPherson finished third and fourth respectively in the event behind Dirkzwager, who won by a second and a half in 56.24 seconds. Savvides was third in 57.94 and McPherson was fourth in 58.48 with Blue Valley Northwest’s Rachel Lyle denying the Blue Aces a 1-2-3 sweep with her runner-up showing (57.87).

“We definitely push each other all the time in practice,” Dirkzwager said. “When we do our backstroke pace, we try to keep up with each other and that’s a lot of motivation. They can get me sometimes, but my pace is usually faster than what they are.”

Dirkzwager finished with two golds for the second straight year, also winning the 100 freestyle in

East saw its two-year reign as 6A team champion end with the Aces finishing third with 267 points. Lawrence won with 303 points and SM East was second with 283.

The Aces also had a pair of seconds from Ariana Dirkzwager in the 200 and 500 freestyles, a second from McPherson in the 50 free and a second from Savvides in the 100 butterfly.

While Astrid Dirkzwager now has five state golds, Wichita West’s Maci McCullough saw her bid for her first state title finally come to fruition. Second in the 500 freestyle the past two seasons,

McCullough gave up the event for state this year, instead turning her focus to shorter distances.

“Two years ago my club coach left for Texas and we got a new coach who focuses on faster training,” McCullough said. “It’s definitely helped my sprints and I started looking good in the 100 free so my mom said maybe we should try it at state.”

McCullough finished second in the 100 free, her third runner-up finish in the past three years at state.

But any sting had already been removed when McCullough captured the 200 freestyle title earlier in the meet.

Battling Ariana Dirkzwager the entire way, McCullough was able to hold off her city rival to win in

“Every meet we swim against each other, there’s always one of the Dirkzwagers there,” McCullough said. “They’ve definitely pushed me to where I am today. It’s definitely back and forth. I was nervous because I went in seeded first and everyone was gunning for me. I just had to get in the mindset I was going to get this.

“I looked under and I saw her creeping up and I told myself, ‘Bury your head and get to the wall.’ I was going to do what I needed to do to get first.”