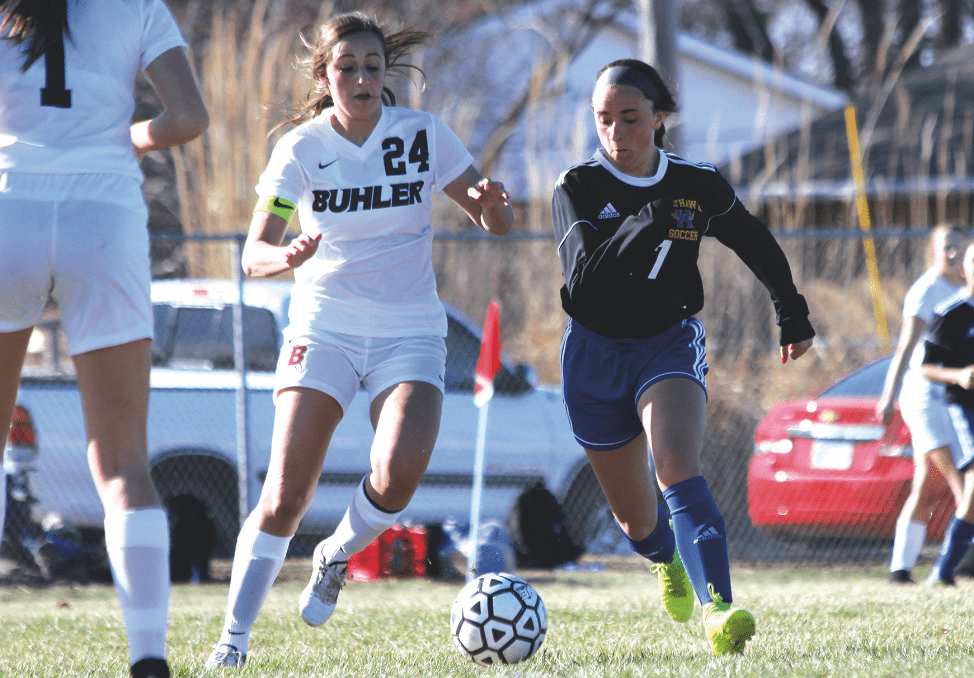 This season had all the makings of the genesis of building something special for the Buhler girls soccer team.

No seniors were on this year’s roster. The seniors that did graduate from the previous year were valuable, especially on defense. Get experience this year, learn to win, and make a push to the state tournament next season.

Buhler, instead, wadded up those plans and chucked them in the recycling bin. Sure, next year could be special, but this year was just that as well.

For the first time ever, Buhler girls soccer won a regional championship. The Crusaders advanced to the Class 4-3-2-1A state semifinals and took home a third-place trophy.

“And we’re not satisfied by any means,” second-year Buhler coach Randall Rank said. “We’re disappointed we took third, but the growth we showed was huge, and the girls will fuel that for the future.”

Reminder – Buhler did not have a single senior on the roster in a season where it won a school-record 15 games, including a school-record nine shutouts, led by goalkeeper Jessi Ferneau..

The seeds for this season were planted late last season, when the Crusaders rapidly improved. Over their last 29 games, the Crusaders have won 23 games.

“To be honest, that was our question mark going into the season,” Rank said. “We returned only one, but we had some girls really step up.”

Maybe the biggest ally to this season was the family atmosphere Rank helped create since his hiring. While many teams eat together during the season, Hutton said Rank went beyond the regular activities.

“He’s always there for us,” Hutton said. “He’s always sending us motivational things, and that’s really important to all of us. If there ever was an issue, he addressed it with us. There was never any harsh feelings, because we were always up front about everything.”

Even though Buhler had a record-setting season, there will be much to achieve next year, including winning the AVCTL III/IV league title, returning to the state semifinals, and taking home a bigger trophy.

Class 5A – Both Valley Center and Bishop Carroll reached the state semifinals and took home a third-place trophy, as storms forced the delay of the tournament by a day and the cancelling of the third-place game.

Both teams should be in the mix again next year, too. However, there will be one void, as Valley Center coach Steen Danielsen is leaving to become the athletic director at Concordia.

Danielsen was at Valley Center five years, and helped lead a Hornet soccer revival, as the Hornets won consecutive regional titles before reaching the semifinals this year, where they bowed out to St. James Academy.

“It was fun,” Danielsen said about this season. “You could tell how excited they were to keep playing with the seniors on the team. They love each other, and it wasn’t necessarily that we made it to the semifinals, but rather it was they were excited to play the game they love with the teammates they love.”

With players like Vanessa Aguilar, Haley Spark and highly-regarded goalkeeper Kyrah Klumpp back, the Hornets should have the personnel to make another run.

Which kind of sums up Bishop Carroll.

The Golden Eagles reached the semifinals for a third straight year, reclaimed a share of the City League championship and seem poised to improve on an 18-2 season that included a win against 6A runner-up Washburn Rural.

Then you look at who’s coming back and it might cause a shudder for any opposing coach.

Taryn Lubbers, a Kansas State commit, played injury free this season and was the midfield general. The Brooks twins, Libby and Lauren, also enjoyed playing without injury. Khloe Schuckman was the main goal scorer up top, but teams that tried to neutralize her were punished by Anna Lasak. Include goalkeeper Madison Wingler, already regarded as one of the state’s best, and it’s hard to figure out how Carroll doesn’t have another strong season.

“It’s difficult to compare different years,” coach Greg Rauch said. “But this was definitely one of the most talented teams we had. We have a lot of college commits, D1 and D2, and it was a special group.”

The final piece to the puzzle will be beating the Kansas City powers. This year, Carroll played eventual champion St. Thomas Aquinas tough for more than 60 minutes before the Saints broke through in a 2-0 win in the semifinals.

“They had better possession, but both teams had chances,” Rauch said. “I felt we were confident going in that we were at least on par with them. The girls knew we had a good chance.”