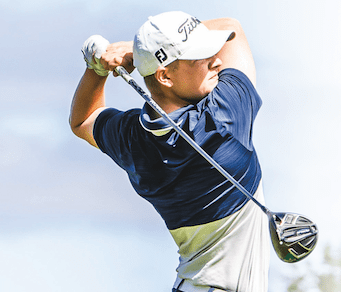 How stressed can you be when your team wins by 57 strokes as Sacred Heart did in 2018?

But on May 29, Muninger was nervous.

He need not have been. Sacred Heart won its fifth straight title by 12 strokes. Sophomore Kameron Shaw won individual honors with a 5-under 66, while junior Tate Herrenbruck took second with a 4-under 67.

“I was kind of shaking my head, because we were missing a few players and I thought, ‘this might the time we could get beat,’” Muninger said. “I knew Tate and Cameron would be in the top positions, but it may be one of the days where we see what the individuals can do and cheer for them.”

Due to multiple delays because of weather, the 2A tournament, which started on May 20, was pushed back nine days.

As a result, two of Sacred Heart’s top six players – freshman Nate Elmore and sophomore Jack Elmore had left on a family vacation to Hawaii. A third, Charlie Skidmore, expected to play but missed after he got stuck in St. Louis because of the tornado that struck in the Kansas City area on May 28. He didn’t arrive back in Salina until 2:30 a.m. on the day of state.

“It was a very weird situation,” Shaw said. “They all worked hard to get to play in state. It’s the way it comes down. It’s kind of unfortunate.”

Since so much time had passed, the 2A tournament at Hesston Golf Course was restarted, the Kansas State High School Activities Association granted Sacred Heart permission to add another varsity player. Muninger added sophomore Morgan Newell so the team had four players, which is the minimum needed to field a state team.

“It was nine days since we played that first day. It was a rollercoaster,” Muninger said.

Sophomore Caleb Gilliland shot an 82 to finish tied for 17th. Newell shot a 98.

“It was pretty cool to win with our team not being full strength,” Shaw said. “We had three gone, but Morgan stepped up. We knew it would be close, and me and Tate did what we needed to do.”

Both are strong in all aspects of the game, which helps them adjust to a poor shot.

Both play a lot of golf – Shaw played in a junior golf tournament on May 30 in Wellington, and the duo planned to play in a Colorado tournament on June 1-2.

Herrenbruck edged Shaw at regionals, but Shaw got him at state.

After going even through eight — just as Shaw did on May 20 before the tourney was postponed and restarted — he shot a 5-under on the back nine. He shot an eagle on his final hole.

“I knew Tate was coming up at 3-under, and I thought he’d at least make a birdie, so I knew I needed at least a birdie to stay even,” Shaw said. “I hit a drive, hit a really good shot at the flag and made my putt.”