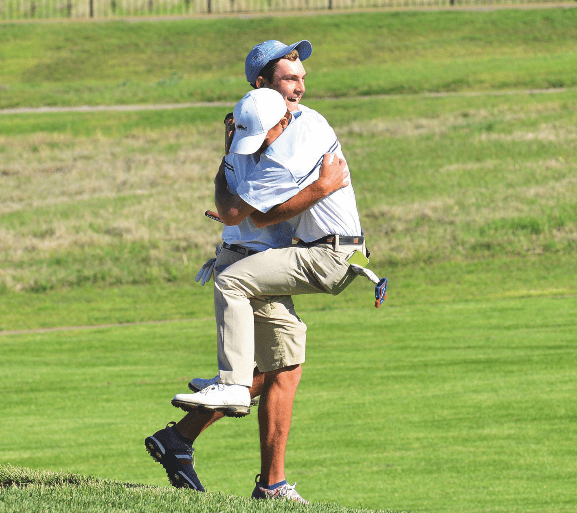 And that’s what Trudo did. He rolled in an eight-foot putt for birdie and then chipped in for a birdie on the final hole to force a playoff.

He won the 5A title on the first playoff hole with a par. Trudo shot a 4-under par 67.

“It’s just something you can’t even put into words,” Trudo said. “It’s something I wasn’t even expecting to happen, and it happened.”

Trudo entered high school with the ability to drive it far. But he needed some course management skills, and by the time he was a sophomore, Trudo had shown improvement.

“When he came to me as a freshman, he had lots and lots of talent,” Hartzog said. “… His game has matured to where he manages the game. He knows where he doesn’t need to hit driver, he can hit iron off the tee, put it in the right place and trust his short game. And his short game is so much better. He has confidence in his wedge play.”

Trudo put in the work in the summer, playing junior golf tournaments and focusing on improving his game.

“Long story short, I used the restroom in the woods and got (disqualified),” Trudo said. “… I shouldn’t have done it. I would have been in a playoff for eighth.”

He had another outstanding year as a junior, but Trudo spent about 10 days in North Carolina before the 5A state meet visiting his brother, who had just gotten out of basic training.

“I shot an 85,” Trudo said. “I was averaging around 72 … and I think I won three tournaments and was second and third in most of the other ones.

After winning back-to-back Class 4A titles, Andover Central had a new challenge – playing in Class 5A.

“When we knew we’d get bumped up (in classification), we knew that it was going to be a challenge,” Andover Central coach Doug Snyder said. “But the guys were kind of excited about that challenge. They worked really hard, and they thought this would be a little better competition. It was really sweet to know all that hard work paid off.”

St. Thomas Aquinas took second with a 297, while Kapaun Mount Carmel was third at 298. Hays finished fourth with a 304, Maize South fifth with a 305 and Bishop Carroll sixth with a 306.

“I’d be lying if I said there wasn’t pressure,” said senior Peyton Wilson, who shot a 73 and tied for 11th. “Everyone on the team handled it well. Out of all the people freaking out, it was my coach. Not that he would tell me, but through his body language, I could tell.”

Snyder wasn’t sure of every other team’s scores, so when Andover Central came in with a 293, he was pleased.

“That’s a really good score, but we still didn’t know what other kids had shot,” he said. “When I was talking with the guys, they all agreed, if we put up a 293, if they can beat that, they deserve it.”

Junior Cooper Schultz was Andover Central’s top finisher with a 71 to finish eighth. Sophomore Austin Goodrum tied for 11th with a 73. Senior Keegan Ellington, who won the 2018 4A title, shot a 76 along with sophomore Cooper Ward.

The individual finishes were disappointing.

“I was pretty upset,” Schultz said. “That was basically the biggest tournament of the year, and … I was feeling pretty good about my game. I didn’t play bad golf, but I didn’t make many putts.”

On the flip side, Goodrum and Ward shot their best rounds of the season. And five players shot 76 or better.

“While I was a little disappointed with my score, there was none of that afterward,” Wilson said. “We were more concerned about the team and so happy to win the team title.”

With three quality seniors a part of this three straight state titles, Snyder is sad the group won’t be together anymore.

“This is a group of kids, especially the seniors, who has worked really, really hard,” Snyder said. “As good of golfers as they are, they’re better people. For me, that’s more of a blessing than anything.”

Wichita Trinity Academy senior Caden Vanlandingham was furious with himself after his final hole. While he had birdied two straight holes, his final hole at Dodge City’s Mariah Hills was a double bogey.

Vanlandingham finished with a 2-over par 73 to win individual medalist honors by two strokes over Sam Majors, his teammate and future roommate at Washburn.

And Trinity won its first Class 4A golf title by 16 strokes.

Vanlandingham was so thrilled that he asked to take the trophy home because he didn’t want to be separated from it.

Class 4A restarted its state competition after being postponed due to weather on May 20 in Winfield. Class 4A finished on May 29.

Vanlandingham missed a family vacation to Florida to compete.

“It was odd because we graduated (May 19) and then the next day was state. But there we were, a week and a half later, playing for state,” Majors said. “But we expected to do this. We’ve ahd the lowest team average all year at a 307 going into state. We knew we could beat everybody out there in any given tournament.”

It was an emotional win for Ziesch, who is in his ninth year coaching. Trinity tied for the 4A title in 2017 but lost on the fifth score. The Knights finished fourth in 2018.

“A year and a half ago, I lost my wife after 35 years of marriage,” Ziesch said. “I’ve invested all my time in these guys. When they were freshmen, I told them they’d win at least one if not two.

“I’m not a super emotional guy, but I had to put my sunglasses on, because there was serious leakage going on. I’ve never had a group of kids like this group of boys.”

Trinity golf has come a long ways in the past decade. In the early years, Trinity was forced to practice at Clapp Golf Course, which is in southwest Wichita – quite a journey for the Knights, who are in northeast Wichita.

And now the Knights have not only qualified for state three straight years but placed each year.

Trinity sophomore Lucas Scheufler finished in the top 20, as well.

Andale finished third and was led by junior Trevor Black, who finished first in a playoff to take eighth.

Hesston coach Grady Pauls was uncertain of what to expect from his team early in the season.

“We had the defending state champ coming back with Grant Brenneman, and that’s solid to build on,” Pauls said. “We had three other seniors off a team that had finished fourth (in 2018).”

Then the regional assignments were released and Hesston had to contend with Wichita Collegiate, Burlington and Cheney.

“Our focus became, ‘let’s get to the state tournament. Let’s focus on regionals,’” Pauls said.

Hesston won their regional and went on to finish third in 3A with a 339, 12 shots back of first. Cheney was sixth with a 341.

Poor weather forced Class 3A to play over two days. After playing a little more than half the round, Hesston got a practice in and Pauls was able to crunch the numbers to see what his team needed.

“They handled themselves so well through the two days, the weird conditions,” Pauls said. “These were things they weren’t used to, and they handled it. You learn from it and you go. It was fun to watch them grow through it.”

Brenneman was Hesston’s top finisher. He was eighth with a 79.

“Obviously he is disappointed,” Pauls said. “But I told him, ‘keep your head up.’ His high school career is one of the better ones I’ve coached. He’s won multiple events, state champion one year. He has absolutely nothing to hang his head about.

“Yes, he’s disappointed, but he’s a team player, and there’s a team trophy that came home.”

Cheney’s Dylan Freund finished sixth with a 78, while Wichita Collegiate’s Zachary Burgess took seventh after shooting a 79 and winning his playoff.

In its first year as part of the Kansas State High School Activities Association, the Classical School of Wichita finished third in Class 1A golf. The Saints shot a 345, nine shots back of first.

Senior Cole Buckingham shot a 77 and finished fifth, while his teammate, freshman Kate Tilma, shot a 78 and won her playoff ot finish sixth.

“A few weeks (before state), a couple said, ‘can we do good at state?’” coach Bob Buckingham said. “I said, ‘there’s no question in my mind.’ There probably was, but I wasn’t going to tell them. You have to believe you can do it.

“Then after we won our regional, someone said, ‘well, there’s 12 teams going to state, we’ll probably come in 12th.’ I nixed that conversation. I told them, ‘we can’t be thinking 12th. We have to be thinking No. 1. It’s a mindset and mental attitude you have to have.”

Sophomore Luke Buckingham missed most of the season with a broken wrist. He had hoped to get it off before regionals, but that didn’t happen, so his coach and father filed down the cast to fit better to play golf with.

He got his cast off six days before state.

Cole Buckingham and Tilma – who played with the boys because the Saints don’t have girls golf – finished first and second in most of their tournaments.