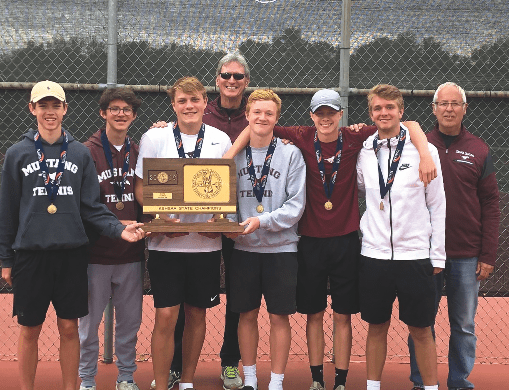 If you’re no stranger to Salina Central High School athletics, you probably know what a powerhouse the boys tennis team has been for many years, and seems like it will for years to come.

Last year, the team was state runner-up in Class 5A by three points, and was made up of five freshmen and a senior.

This year, the Mustangs won their 12th state title in school history, (all in the last 27 years) with five sophomores and one freshman.

“This year’s team benefitted from another year of maturity and experience,” Mustangs coach Mike Goll said. “Our team strengths included an exceptional work ethic and competitive nature. The off-season from high school season is spent taking numerous lessons and competing in summer tournaments.”

“As a young teacher, I kept busy with all the sports seasons. I coached football, volleyball, basketball, track and tennis,” Goll said.

Goll has three sons, who all came to find that tennis was their favorite sport.

“Chandler played four seasons at the University of New Mexico, and Connor and Spencer played each other in the state singles finals in 2009,” Goll said.

In 2006, Goll got the opportunity to work with former coach Jimmy LoVullo and has been involved with tennis ever since.

“It is the only sport I work with today,” Goll said, “A great sport that people can be active with all their lives.”

The Mustangs have accomplished several goals this year, from winning the state title to earning single achievements. The team acts as a unit and there is no one leader.

“It was a very cool experience winning as a freshman, with my partner, Will Hayes, who was a senior. This year my partner, Max Shaffer, and I were second in state and our team finished first, so it was exciting to play and win with my friends,” McHenry said, “This year has only made me want to work even harder to hopefully win more championships.”

McHenry got into tennis through his older brother JD, who won doubles as a senior in 2016.

“He had a lesson, and when my mom took me along to pick him up, the coach asked me if I wanted to take a lesson. I tried it, liked it, kept playing and have worked hard at developing my game,” McHenry said.

Shaffer, who placed 7th in singles last year as a freshman, was excited with his achievements this year.

“Being runner-up in the doubles division was very cool, because last year, I placed seven in singles, so to jump my placing up to second in doubles in one year shows how much I have improved since my freshman year, but I couldn’t have done it without my doubles partner either,” Shaffer said,

“Winning state as a team this year was extremely special, given the fact that our whole state team was filled with underclassmen and we still managed to win the team title fairly easily.”

As young as this year’s team was, they never saw it as a disadvantage.

“We always set lofty goals for our kids and our team. It’s important to set goals and work hard to achieve them,” Goll said, “We relish in the fact that a target is always on our backs. Everyone plays their best to beat Salina Central and there is a reason for that. Our tradition and our history.”