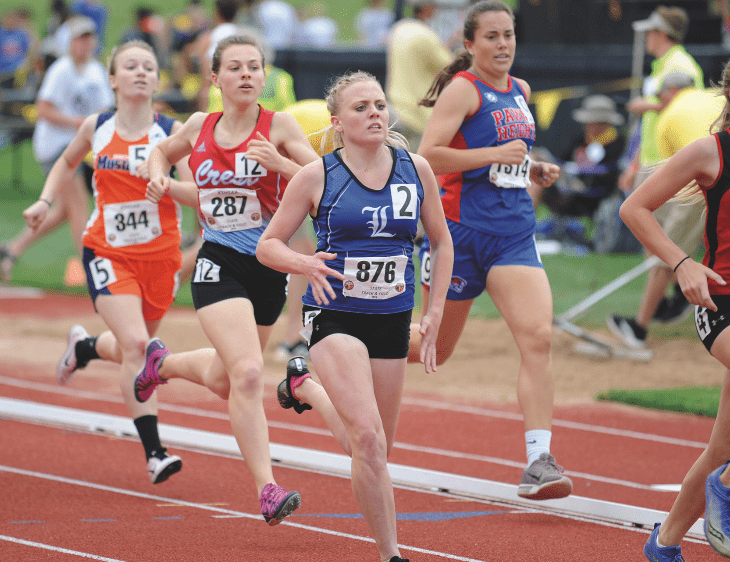 Aubry Donley, Jaycee Vath, Raegan Stewart and Shelby Ford completed one of the most decorated running seasons in the history of Lincoln.

In the fall, the foursome led Leopards to their first-ever cross country championship and last month, they finished second at the Class 1A state track tournament.

Head coach Steve Crist figured his team would be in the mix for a state title, even though only those four were going to get the points.

Throughout most of the season, Crist thought his relay team was the best in 1A, as they were putting up times just above 10 minutes.

However, he began to notice that Berean Academy’s times were similar to the Leopards and he was not as sure going into state about his team’s chances.

“I really thought we were the favorite for most of the season,” Crist said. “But at the league meet, Berean went under 10 minutes. I figured it was going to be a tough race. At regionals we ran a 10:14 and made it look easy, so I felt more confident.”

Donley and Vath had polar opposite running styles and abilities, but both made their unique approach work.

“Jaycee is an amazing competitor,” Crist said. “She hates to get beat. I wouldn’t have guess that she would be a great runner, because she is not the typical build. But she shines when it’s time to compete.”

“Aubrey is a natural, smooth runner. I remember thinking there were times when I thought she wasn’t working hard, but it was because she is so smooth.”

Class 3A – Both the Smoky Valley boys and girls teams placed inside the top three.

The girls team took third, while the boys took second.

“It was just incredible and amazing at the same time,” Smoky Valley coach Jay Myers said. “Looking at the teams, we thought we had the chance. We were just hoping to have the opportunity. But the kids still have to go and do it and they did it with focus and grit.”

Tim Lambert was dominant in his events.

Also on that team was Carson Windholz, who took second in the long jump. Lane Schrag and Andrew Peters were also on the relay team.

Seven of the 11 boys who qualified for state earned medals

“They are a great group of guys,” Myers said. “Tim has an unbelievable work ethic. Lane had been playing baseball, so this is his first year in track since middle school, so his success was unexpected. Carson had an awesome meet, Andrew Peters took frustration from pole vault in the relay.”

Isabelle Peters finished second in the 100 hurdles and then won the pole vault.

Eight of the ten girl participants took home a medal.

“We’ve been expecting this from our girls for awhile,” Myers said. “Last year, we were a few points from a trophy. But we knew our eighth graders would give us a run for the trophy.”