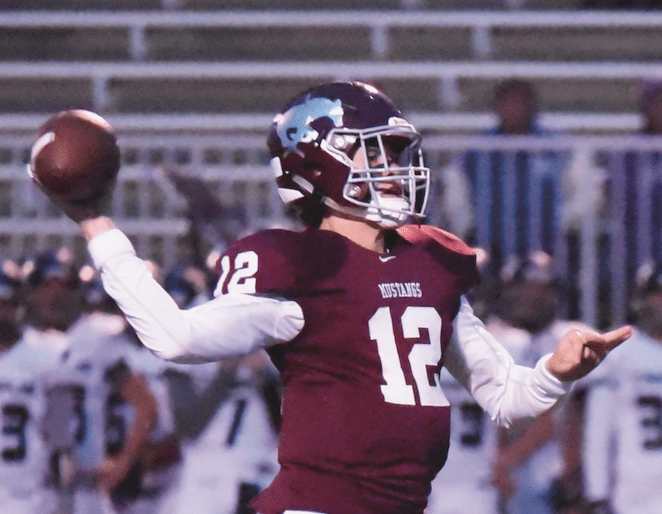 Salina Central made such significant strides in 2018 – ending an 18-game losing streak in the season opener and finishing 7-3 – that it is understandable if the focus continues to be on that success.

“It was incredibly special for those kids,” second-year coach Mark Sandbo said. “They went from not experiencing a varsity win to really competing and feeling that we could compete in every game. It’s where we want to be. It’s the expectation for Salina Central football.”

“It’s a championship-caliber program when you can stay up there,” he said. “We know everyone will play their best when they play us. The target is on our backs this year. Every team in this league can beat anybody. But when you play Salina Central based on last year and what we have returning, we have to understand they’ll play at their best when they see us.” 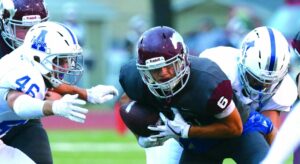 Salina Central’s Cooper Chard carries the ball through the Andover defense during a game last season. (Photo by Kim Rayas)

“He’s just got that ‘it’ factor,” Sandbo said. “He’s going to have to take more steps this year. There’s more on his plate. He’ll have to be the guy who spearheads everything.”

In 2018, it was then-senior running back Taylon Peters who was the go-to offensive player.

“(Kavanagh) will assume that role now,” Sandbo said. “He’s a guy that’s ready to take that next step in what we do and own the position. When we need to make a play, he’ll do it. … The talent is there, now he needs to do some things in the quarterback position that aren’t seen in the stat book. When things go bad, he’ll need to stay positive, galvanize guys.” 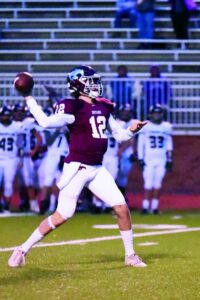 Salina Central quarterback Jackson Kavanagh (12) throws a pass during a game last season against Andover. Kavanagh is back and should be one of the best quarterbacks in the area. (Photo by Kim Rayas)

Peters’ graduation is a loss in the backfield. Kavanagh will likely increase the number of times he runs the ball, but he’ll still be a pass-first quarterback.

A key target will be senior Quinn Stewart, who is 6-foot-4, 240 pounds, who made a non-binding oral commitment to Oklahoma State in June.

“He’s kind of a matchup nightmare,” Sandbo said. “His fine and gross motor skills are exceptional. He’s a great route runner. … His work ethic is at another level.”

Stewart is coming off a season-ending broken elbow suffered in a loss against Maize.

Senior Cooper Chard will step into the running back position. He’s a veteran player who brings strength, power and speed.

The offensive line continues to be strong with Houston Griffitts, who has speed and physicality.

“I told him that if we could recruit at the high school level, he’s exactly who we would be recruiting,” Sandbo said. 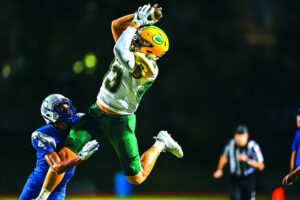 5A Around the area

Wichita Northwest returns quarterback Reagan Jones, who had more than 4,000 yards of offense, from its team that finished second in 5A. The offense returns a strong corps of receivers and offensive linemen, which will take pressure off a new cast of running backs. … Bishop Carroll, a perennial power, returns seven offensive players, including four offensive linemen led by all-league first teamer Ethan McMillan. The quarterback position will be a battle between Aiden Niedens and QB/RB John Honas, who suffered a season-ending injury after starting the first two games. Only four defensive players, including Dalton Nichols and Justin Powell, return. … Maize returns five offensive and five defensive starters from its team that went 10-2. Running back Caden Cox will be a key part of the offense.