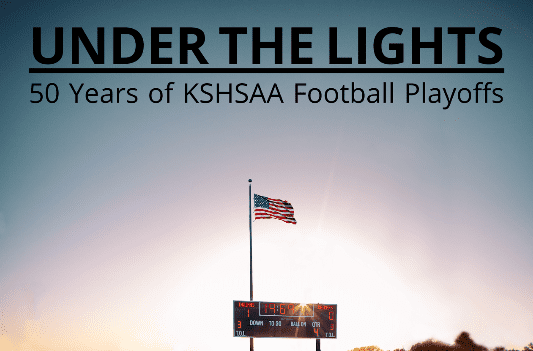 Being from Syracuse, and having worked at newspapers in Fort Scott, Dodge City, Salina, Hutchinson and Garden City, Brett Marshall figured he knew all there was to know about Kansas high school football.

Marshall’s experience and knowledge made him a natural to piece together, “Under the Lights: 50 Years of KSHSAA Football Playoffs”, a new book celebrating the 50-year anniversary of Kansas State High School Activities Association postseason football. But even though he has covered scores of postseason games, this project has been an eye opener. Even Marshall has picked up some tidbits and facts he didn’t know.

For instance, Barry Sanders, regarded as one of the best players in NFL history, played in just one postseason game at Wichita North. Also, NFL legend Gale Sayers was born in Wichita before moving to Omaha, Nebraska, where he grew up before returning to the Sunflower State to play at the University of Kansas.

The book is available to purchase through KSHSAA’s web site (www.kshsaa.org) for $20. 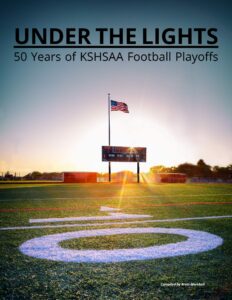 KSHSAA’s new book on the 50 years of playoff football is available to purchase at www.kshsaa.org, and Brett Marshall, who coordinated the book and wrote several chapters, will tour the state during Friday nights to sell copies.

“The general idea for this was born with Carol Swenson, when he compiled track and field, basketball and cross country history,” Marshall said. “Those were magazines with records. Last fall, I had just retired. I was talking with Jeremy Holaday about some golf stuff, and I asked him about compiling a book for 50 years of playoff football.”

Holaday, KSHSAA’s Assistant Executive Director, met with Marshall, and by January, the proverbial wheels were set in motion. A book documenting the first 50 years of playoff football would be ready for the 2019 season.

But Marshall knew he couldn’t undergo such a monumental task alone. Thus, he employed the help of many sports journalists across Kansas to compile stats and help write chapters detailing the history of the playoffs.

“I thought, ‘Who better to write the chapters about what they’ve seen than these people’?” Marshall said. “I’m so proud of everyone who contributed. Maybe they did it because they felt sorry for me, but when I explained the content of the book to them, they were on board.”

The chapters include stories about the Lawrence, Salina, Smith Center and Hutchinson dynasties, powerful teams from Wichita and Topeka, and chapters written from some of the best players in Kansas history, such as Steve Grogan and Ben Heeney.

There is also a massive statistics section, encompassing 150 pages.

“I said before that this book will create stories,” Holaday said. “We don’t claim we captured every story of playoff football in Kansas, but it’ll make you think about your story. It’s important to tell these stories to show the importance of football throughout Kansas.

“Also, we’ll be able, in some aspects, be a storyteller and record keeper.”

Marshall said he would take a tour of Kansas during the season and set up a table to sell the book at many of the state’s top rivalry games, as well as state championship day.