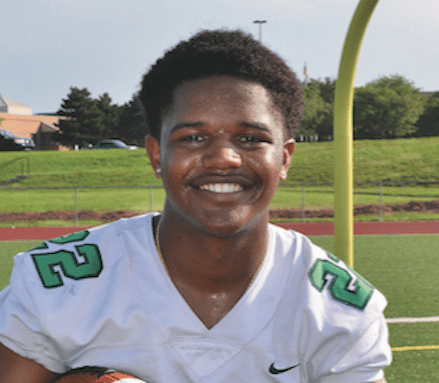 The progression of Derby running back Tre Washington has been dramatic.

While his pure athleticism was clear to Derby coach Brandon Clark when Washington was in middle school, there’s so much more to the senior now.

“His maturity has probably increased more than anything,” Clark said. “More than his athleticism and strength. He’s one of the most athletic guys on the field, always has been. But he is learning that if he concentrates and gets the mental and maturity aspect down, he’ll be even better.

“There’s only so far you can go, as fast as you can be, moves you can make – the rest is the mental game. And he’s had the best summer he’s ever had.”

Washington, who had 1,836 rushing yards in helping lead Derby to the Class 6A title, is so smooth when he’s running the ball. He’s got the hips, the moves, the speed. 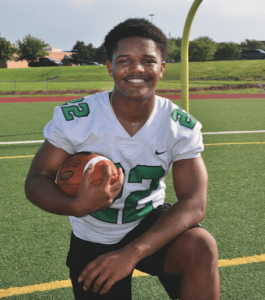 “He’s got some great moves, but he’s graceful with it,” said Clark, whose team won its third title in four seasons. “He has great hips, but that grace about him, he makes it look so simple.

“Some guys have all the moves and they’ll cut 10 different times. But Tre makes a couple sped-up moves and he goes. It’s so natural and graceful.”

Washington added strength in the offseason, dedicating himself in the weight room more than he had in the past.

“Earlier on in his freshman year, he was wanting to get to the edge because he was one of the faster guys,” Clark said. “But as a sophomore and junior, he wasn’t the fastest – or that much faster – so he would have to run between the tackles. … But he learned how to read the defense, to see the holes before they even open.”

Over the past two years, Washington also improved his speed, agility and ability to change direction.

“Now he’s back up on top where he’s one of the faster, most athletic guys, so he can combine what he learned,” Clark said. “Now he’s back on top. It will be fun to watch.”

Senior center Kevin Washington appreciates blocking for Tre Washington. He knows the running back will keep working for the extra yard.

“He’s been working his juke moves for a while,” said Kevin Washington, who is not related to Tre. “If he takes a quick step to the left and then heads right, he’s going to lose defenders right there. Tre sees the holes open up, sees what we create for him. 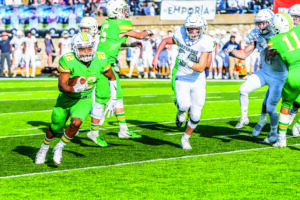 “But if it clogs up in the middle, he can bounce outside. He can get a few yards up the middle if that’s what we need.”

Tre Washington, also a starting guard for the basketball team, was a critical factor in Derby’s championship run in November.

And yet, the spotlight from football fans across the state rarely shined directly on Washington in 2018.

“He’s a competitor,” Clark said. “When he and (senior quarterback) Grant Adler are in the backfield, they think they’re the two best guys on the field. They won’t back down to anyone. They believe they will beat anyone.”

“You’ve got other running backs in the state getting recruited and they get talked about more,” he said. “I know I’m in the conversation, so when I’m not talked about, it’s what fuels my fire.

“I feel like I can do everything on the field. I can go in the slot, go empty (backfield), I can catch, I can hit the holes, I can outrun people.

“I do need to improve on my blocking, but I feel I’m a complete back… Anyone close to me knows what I bring to the table as far as football. I don’t care about the naysayers.”

It’s doubtful any opponent will overlook him.

“Honestly, in the area, Wichita, the other leagues, I can’t see anyone who can compete with him,” Kevin Washington said.