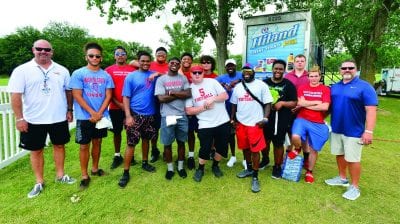 The Wichita Open is one event Dylan Davis and Daylon Harris look forward to every year.

It’s not because the Wichita South football players are mega golf fans, or that they can spend a couple days lounging in the shade, sipping ice-cold lemonade and watching high-caliber professional golf.

Instead, it’s because they can work all day in the sweltering heat.

Yep, it’s true. Wichita South football players have volunteered time at the Wichita Open for six years now. And the work isn’t easy. They lug 10-pound bags of ice – usually more than one at a time – around the course. They also haul cases and crates of bottled water and soda pop. 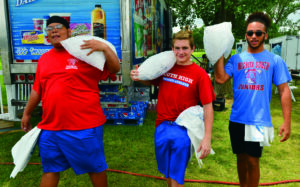 “I didn’t have much going on those days, so I thought I would help out as much as I could,” said Davis, a junior offensive offensive lineman, who was in his second year of volunteering. “It’s a good workout too.”

Harris, a senior linebacker and wide receiver, has helped for three years. He said it’s not just about helping at a community event, but also it serves as a chance for the Titans to bond and make people aware of their football program. 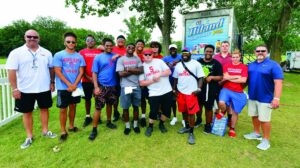 Members of the Wichita South football team, along with VYPE CEO and publisher Mike Cooper (left), pose for a photo while helping out at the Wichita Open golf tournament. (Photo by Dale Stelz)

“To me, it’s more than about football,” Harris said. “To me, it’s a chance for team building and bonding. The last few years, I don’t think we bonded as much as we did this time.”

Former South football coach Kevin Steiner was instrumental in getting the program started, and its popularity has increased with the Titans through the years.

“On the busier days, we had probably mid-teens, as far as number of kids there,” said first-year South coach Russ Wells, a South alumnus. “We had a total of 30, 40 different kids working during the week.

“It’s really a great deal. It’s such a big event in Wichita, for so many businesses and organizations, and it’s an opportunity for everyone to see what great kids we have at South High, how polite they are and how hard they work. We had so many people come up to us and give us compliments, singling out the kids and saying what great kids they are. We’ve even had people ask if we can help out with other events, since we’ve done this one and have that experience.”