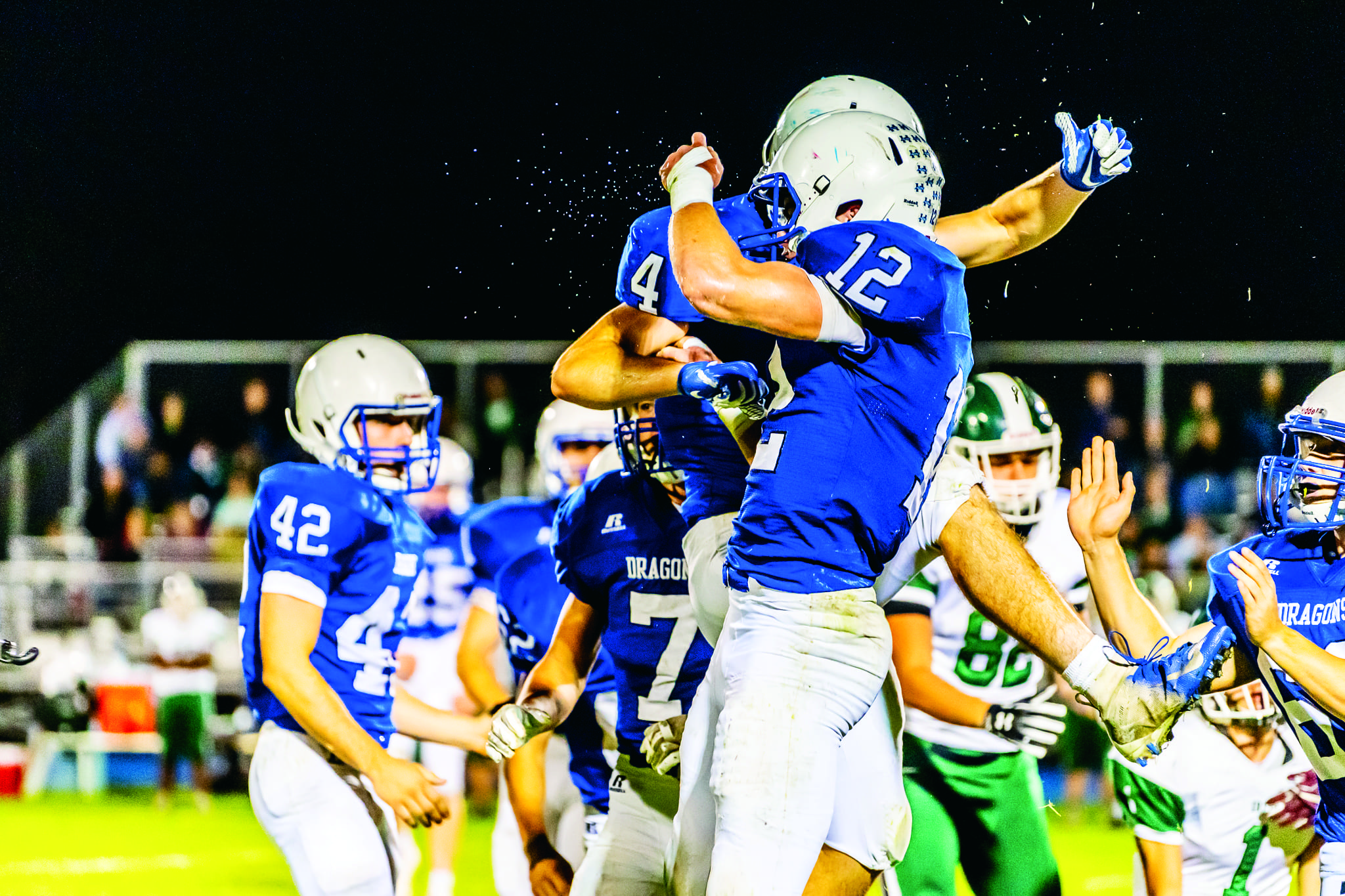 Like just about any coach’s kid ever, Halstead senior tailback/safety Scott Grider has heard the jokes that he only gets playing time because his dad, Jason, is the Dragons’ football coach.

Grider is unfazed by the teasing.

“I know that with my dad as my coach, I will always have someone there to yell at me or push me as hard as he can,” said Scott, whose dad is also the track coach. “I’m used to it. I know he wants to get the best out of me.”

Scott’s playing time is definitely not in question after his breakout junior season, when he had 1,434 rushing yards and 21 touchdowns while leading the Dragons with 101 tackles from the safety position.

Scott also gets pushed plenty by his bigger – but younger – brother, Doug, who is a junior lineman. While Scott is 5-foot-10, 185 pounds, Doug is 6-2, 225 and plays middle linebacker and guard. 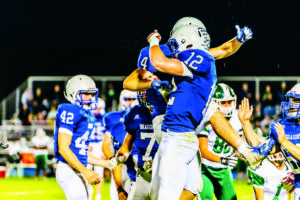 Halstead’s Scott Grider celebrates a big play during a game against Chapman.

“I was bigger until about freshman year,” Scott said. “He got hurt and he put on about 40 pounds. It helps the team out because we have a bigger guy on the line. We run behind him a lot. He’ll get a knockdown block and then he hopes that we’ll cut back so he can get another guy.”

The brothers are so tight that it’s rare to see one without the other.

“Doug has always played up to be on Scott’s team,” Jason said. “(Doug’s) a kid who we’d take to Sunday School class and he’d lie (about his age) so he could go in with his older brother.

“They’re pretty inseparable. When they see Scott’s truck coming, Doug’s in the passenger seat with him.”

“We have a river in town, and Doug usually catches everything,” Scott said. “I don’t catch crap. Once he catches one, he jumps in (the water).”

And for the past two summers, they work out together three or four times a day. They lift with the team from 6 a.m.-7:30 a.m., then go home and eat. They’re back at 9 a.m. for football workouts. The duo then eats some more. Around 3 p.m. there’s another workout, although if Scott’s doing a distance workout, Doug stays home. And finally, at 4:30 p.m., they lift weights.

“That’s something we decided,” Scott said. “We thought we needed to get a lot bigger if we were going to have a chance at a (Class 3A) title. That’s what we’ve been working for.” 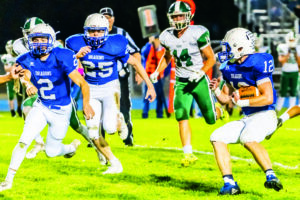 Scott believes it can happen this year.

“We’ll have a pretty good (offensive) line with Doug and a couple seniors and juniors, so we’ll be older up front,” Scott said. “We have a quarterback (Lakin Farmer), who can hopefully throw the ball more, and he can run. And our fullback (Kaden Kraus), he’s coming back (from an injury). We have a pretty good slot back, too. Defensively, we’re fast.”

Multiple players have started since their freshmen seasons.

The Dragons will rely heavily on Scott again.

“You can always count on (Scott),” Doug said. “If I had to play with anyone, I’d play with him. I can count on him to make plays. Even playing backyard ball – if I’m the captain, I choose him first.

“He’s a phenomenal worker. He works his butt off to be how he is today. He has a lot of heart, and he’s tough.”

Scott doesn’t have top-end speed, but he doesn’t get caught. He’s quick laterally, and he can run inside or out.

“He’s strong and pretty explosive when he hits the hole,” Jason said. “We can use him in a bunch of different ways. And defensively, he gets us lined up. He’s our quarterback in the (secondary), making sure we’re in the right coverage.”

Teams will likely load the box against the Dragons, but with a healthy Kraus and a big, experienced line anchored by Doug, opponents will be tested.

None of this is news to the Griders. Many of the family conversations – mostly at the dinner table – revolve around football.

“Our dad tells us what we did wrong, we try to fix it, try to get better,” Doug said.

Jason added: “We do a pretty good job as a family of not getting into it too much at the table, whatever the sport is. We laugh and joke about it.”

And in track season, Jason is still serious, but it’s just less intense than football.

Sports is a special part of their relationship, and Jason sees the end of this time coming oh-so-quickly.

Both boys are in two of Jason’s classes, advanced physical education and weights, while Scott is Jason’s teacher’s aide.

“I’ve coached them since they were little bitty,” said Jason, who coached the boys in little league football, baseball, basketball and track. “… Being able to coach the boys in high school is pretty special. I tell my wife that I don’t know what I’ll do in a couple of years. I see them at home, then I’m with them in high school.”