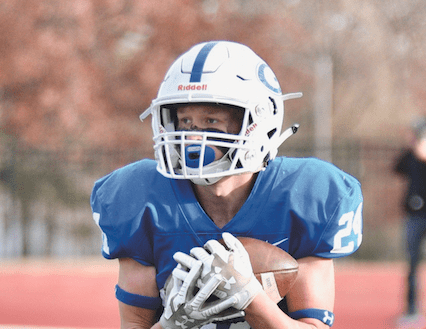 BACK FOR MORE: After reaching title game, Goddard has pieces to at least match last year

“Hopefully this year is the year,” coach Tommy Beason said. “Our schedule is pretty unforgiving. The challenge is to get through the season and set yourself up for a playoff run. We’re excited. We have good returning pieces.”

Junior quarterback Kyler Semrad is a key returner. He’s highly accurate, has a strong arm and is tough. He had 1,963 passing yards in 2018, completing 54.1 percent of his passes.

“He’s been gifted with unbelievable toughness and accuracy,” Beason said. “So when there’s a hard throw to make, he has the ability to make that throw.”

There’s plenty of receivers for Semrad to choose from in Carter Morrow, Blake Mitchell, Jake Shope, Soren Carr and Kaeden Hofer – who are all at least 6-foot-1. 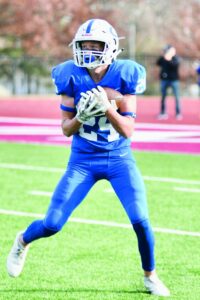 Goddard’s Dalton Caraway snags a pass during the 2018 Class 4A state championship game in Topeka. (Photo by Kim Rayas)

So while Semrad can be a dual-threat quarterback, why run him?

“We want to spread the ball to maybe the best receiving corps – I’d be stupid not to do that,” Beason said.

Mitchell had 597 receiving yards and six touchdowns, while Morrow had eight touchdowns on 20 receptions. Hoefer added 450 receiving yards. The run game will have a different look. This isn’t a feature back sort of offense, but there’s plenty of talent from a strong set of defensive players who will get carries, starting with Dhimani Butler, Zeke Howell and Taygen Bantz.

“We have monsters,” Beason said. “They’re all defensive studs, and Dhimani Butler is a next-level running back right now. We’ve worked with him a lot. He is, God bless him, he is a tank. Zeke Howell, he’s a monster running, as well.”

Butler made his name on defense in 2018 with 106 tackles. He’s now one of the primary vocal leaders – as well as bigger and faster.

“He’s the most dominant guy in the league,” Beason said. “But his growth for our team also includes his willingness to be in the leadership and vocal position with other people looking to him to provide that.”

Howell, a defensive lineman, led Goddard in sacks in 2018 with 18. He also had 75 tackles. He returned to football last season when Beason put him at nose guard. Despite being undersized, Howell was fast and strong. Beason called him “next-level good.” Nalell Kapten, a senior cornerback, finished with five interceptions as a junior.

4A around the area

McPherson has some holes to fill from its 11-1 season, especially at quarterback, running back and wide receiver. But the Bullpups have a strong offensive line and return six defensive players, including DE Cody Stufflebean and LB Bryson Labertew and Mason Thrash.

Andover Central, which has 18 seniors, returns quarterback Shomari Parnell, who played in six games, as well as receivers Xavier Bell and Matthew Macy, and running back Ty Herrmann. Linebacker Trey DeGarmo is a top returner on defense.

Buhler was 5-5 in 2018 but looks to get back to a winning record with five offensive and defensive starters back.

Mulvane returns quarterback Tab Creekmore from a devastating season-ending injury. He threw for 1,386, and while Mulvane has a new corps of receivers, running back Cole Diffenbaugh is back.

Wellington will rely on its line – its whole offensive and defensive line is back.