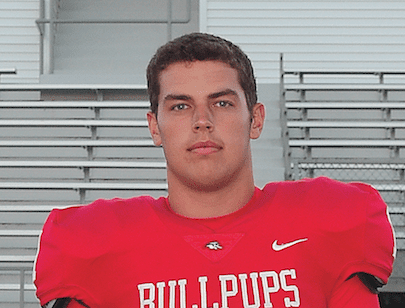 Ali and Curt Stufflebean made an agreement early on that they wouldn’t force their only child, Cody, to play a sport he didn’t want to. Both were junior college All-Americans in the javelin and understand the importance of loving the sport you play. However, when Cody was heading into his freshman year at McPherson, he decided not to play football. And that’s when the Stufflebeans changed their minds.

“We said, ‘yes, you are,’” Ali Stufflebean said with a laugh. “I work there. I knew the type of guys he was going to be dealing with. We told him, ‘you need to give them a chance. If after your freshman year you don’t want to play, you can be done. I don’t want you to quit now.’

“Curt and I ate our words and forced him to go out, which we said we’d never do.

Cody Stufflebean, who is a 6-foot-4 and 237-pound tight end and defensive end, committed to play at Kansas State over the summer.

“When I was in seventh and eighth grade, I didn’t really play that much and I didn’t really like it,” said Stufflebean, who also had offers from Akron, Colorado, Virginia Tech and Wisconsin. “I wasn’t having fun. We weren’t winning, and it wasn’t fun anymore.

“… I kind of had to be forced into it, but I came in with juniors who I had a good relationship with, and it became more of a family. People cared for you. You wanted to be counted on. That’s when I started to like football more.”

By game one of his freshman season, McPherson coach Jace Pavlovich knew he had something special. By game one of his sophomore season, Stufflebean had earned the starting spot at defensive end ahead of a senior. Stufflebean passes the eye test for a Division I athlete with his size and his quickness. He’s also highly athletic, can run and catch. 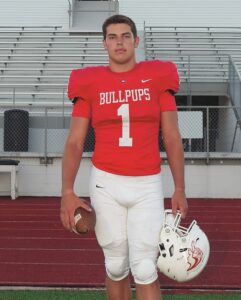 “The first thing you notice is his motor – it never stops,” Pavlovich said. In the 4A semifinals against Goddard, “he was getting held on a constant basis. That’s the only way to slow him down. He’d fight off those holds and still make plays.

“Defensively, he does everything right, everything he’s coached to do. Offensively, he didn’t have a real major role because we were incredibly talented and deep at receiver. This year we will put him at tight end and fullback and move him around to create matchup problems.”

Stufflebean is one of those well-rounded students. He’s got a 4.0 GPA, he starts for the basketball team, he throws javelin and he competes for the clay-shooting team. Hunting and fishing have long been family activities, too. It’s all about details for Stufflebean – he’s the guy who not only puts his towel away in the bin in the locker room but makes sure there aren’t any on the floor or on the side of the bin. Everything in his locker – his helmet, shoulder pads – are exactly how the coaching staff expects it. He stays after weights to pick up and get the weight belts put away.

“He makes sure the other guys take pride in doing it, too,” Pavlovich said.

The talent and size are a huge part of Cody Stufflebean’s allure. But this isn’t a player who is coasting on physical attributes.

“He has worked for everything that he’s got,” Pavlovich said. “… He has sat down and talked to me about every position and what every position does and techniques and assignments and key reads.

“He’s incredibly knowledgeable. And on the field, you tell him once, and he does it. With his athleticism and size, he does it all well.”

That knowledge pays off.

“I want to know how the offense flows,” Stufflebean said. “If you know what the quarterback and running back are doing, what the tackle will do right beside you, it helps you understand what to do.”