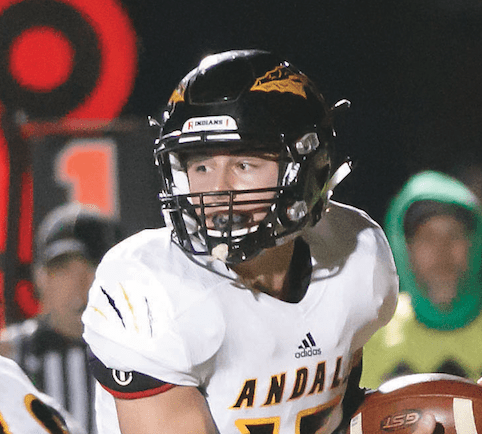 NO DROPOFF FOR ANDALE: Despite heavy graduation loss, Indians expect to contend in 3A again

The loss of 18 seniors in Class 3A could be a major concern for most football teams. Andale has 18 seniors again, has skill players galore and returns seven defensive players who helped the Indians hold opponents to 7.5 points per game.

“It’s confidence and experience with our kids,” third-year coach Dylan Schmidt said. “They know what it takes to win. There’s always a little bit of luck involved – if you get the wrong guy hurt, it’s tough. The key is to keep our guys healthy. But they have experience, the dedication, they’ve been here. They know what it takes. And the fun thing about Andale is year in and year out, we feel we have a shot. A shot to take it all and go on and win it.”

Since the Indians return senior quarterback Easton Hunter, who split time as a starter the last two years, Andale will throw more this season.

“He’s such a good athlete,” Schmidt said. “… He can play everything for us – he’s our punter, our kicker, our water boy. We need to find ways to get him the ball, so we’ll be creative with him. He has experience and he provides leadership.” 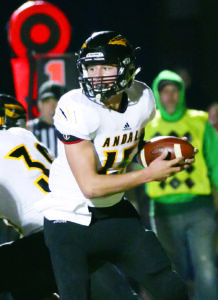 Andale quarterback Easton Hunter surveys the Pratt defense during the Class 3A state semifinals against Pratt. (Photo by Nikki Hightree)

Hunter played in the Class 4A-I title game in 2017, and he led the Indians to a game-tying score late in the 2018 3A semifinal. Andale’s leading rusher, senior Mac Brand, returns. He finished with 764 rushing yards.

“We should have gotten him involved earlier,” Schmidt said. “We usually spread out (the carries). Eli Rowland stepped up last last year when we had an injury and he played in all the playoff games. So we have more experience with him, too.”

Scotti Easter is the top receiver back. A three-sport athlete, he’s fast, physical and has excellent hands, Schmidt said. Easter also led the defense in tackles with 96 from the cornerback position.

“Our defensive players are speed guys,” Schmidt said. “They run to the football. But over the last two years, it’s been our turnover margin. We take it away three, four times a game and only give it up one time. I hope we can continue doing that. We had five shutouts last year, and while shutouts are one thing, take it away is another.”

Brand is a three-year starter at linebacker, and he has the ability to run down opponents. Caden Parthemer and Cayden Winter will also be keys defensively.

Halstead returns a strong backfield with running back Scott Grider (1,434 rushing yards, 21 touchdowns) and fullback Kaden Kraus, whose season was cut short with an injury. They will run behind a line that includes Doug Grider (6-foot-3, 235 pounds).

Hesston only has four returning offensive starters, but several got quality time, including quarterback Jacob Eilert, who was 2-0 as a starter, and running back Max Arnold.

Beloit returns seven starters with senior quarterback Hudson Gray back after suffering a season-ending injury. Cason Cox is back at running back and linebacker, as are receiver/defensive back Vincent Palan and OL/DL Creighton Johnson.