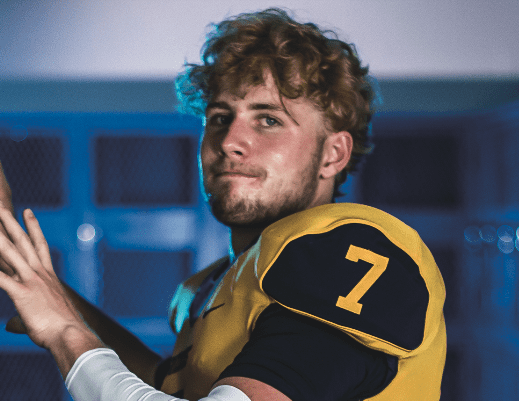 A STUDENT OF THE GAME: Northwest QB has taken to video to help put up video-game numbers

Soon after quarterback Reagan Jones transferred to Wichita Northwest in the second semester of 2018, he approached coach Steve Martin about watching game video together. With about eight months before the first game, Jones figured it was the best way to learn the Grizzlies’ offense. Those video sessions evolved into a weekly dinner with Martin and his family.

Jones, who helped lead Northwest to the Class 5A title game in 2018 while passing and running for more than 3,800 yards, has become another member of the Martin family. So if the Northwest coaches are still in their meeting, he hangs out with Martin’s wife, Natalie, and their kids, Tia, Brock and Karli.

During Northwest’s youth camp, Jones cheered for Brock, who is a fifth grader.

“He made some incredible catches,” Jones said. “I really love that kid. One night when I was there, his PlayStation wasn’t working, so I set it all up for him. It’s been cool kind of being a big brother to him.”

The knowledge that Jones has culled from Martin and their video sessions had an immediate impact on his play.

“Watching that much film was completely new to me,” Jones said. “… We had team camp last summer, and I came to his house and watched film. I really liked it. He taught me everything.

“He really slows it down and breaks down the things I wouldn’t see on myself. He tells me the little pieces, while I looked at the big scheme of things.” 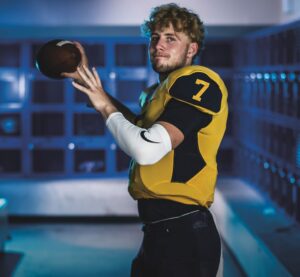 Jones’ knowledge evolved to where he’s now able to tell Martin first what’s happening on the field or what he’s seeing on video. It also helped Jones become a better leader.

“This year he’s correcting other players,” Martin said. “He’s coaching quarterbacks up. He’s coaching receivers up on routes. He told me he’s going to have a film session, just him and the wide receivers. That’s pretty special for a 17-year-old kid to be able to do that. I think it’s pretty special. A lot will go out and just throw 7 on 7 or throw one-on-one routes. That’s not enough for Reagan.”

“I can put (a pass) where the receiver can get it and the defender can’t,” said Jones, who completed 57 percent of his passes. “I can put it in holes, even if it’s zone or man. Throw it all over the field.

“But running behind this line is fun to do, and my receivers do a great job blocking. It’s easier to run the ball, but passing it gets you more yards.”

Jones’ ability to extend plays puts pressure on defenses, who struggle to keep him from getting the first down or make the big play.

“The game-winning touchdown against Maize in the semifinals … he tucked the ball, two steps forward, three steps back and threw over the head of the safety,” Martin said.

That Jones can create more time for his receivers to get open makes him real popular.

“The money routes take just a little bit of time to develop,” said senior receiver Zion Jones, who is not related to Reagan Jones. “He’s someone who can throw the money ball and make time for it. Someone who can move the chains. He scrambles well in the pocket. He’s fast. And he can throw pretty good on the run.”

Yet Reagan Jones arrived at Northwest with questions regarding his ability to run.

“Our quarterback has to be involved in the run game somewhat,” Martin said. “We didn’t need him to win games running the ball, but what he was able to do for us was become a better athlete in the weight room.

“He was fairly weak as a sophomore. He was challenged, and it shot up his athleticism. He worked on his speed. He put in the hours in the weight room.”

Jones put on 21 pounds since last season, but that’s just one part of his improvement.

“My mental side of the game has improved a lot. The reads. I can make all the reads,” he said. “The schemes and why we do stuff makes sense to me. This is crucial to the quarterback position and being a leader.”

The spotlight is squarely on Jones this season. In 2018 he was the new guy, and Iowa State signee Breece Hall was at running back. On defense, there were experienced and talented leaders, including Josh Carter and Marcus Hicks, an Oklahoma signee. Jones didn’t have to carry the team. He absolutely could and did, but he didn’t have to. This season Jones can and will carry the team because Northwest has young, inexperienced running backs. He’s far from alone with a strong receiving corps and talented, veteran offensive linemen. Likely the biggest change will be his leadership.

“My role as a leader has definitely changed,” Jones said. “Last year was more Josh and then on the offensive side with Javon (Wheeler).

“Now I need to tell everyone what to do and where to be. It helps that I know the positions, because I have to help everyone else succeed…. But we’ve got experienced receivers and our offensive line is experienced. The line is always a strong part of our team.”