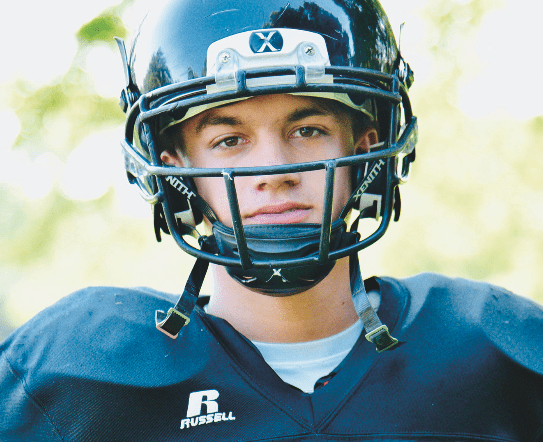 Mr. Versatile: Sylvan-Lucas’ Batchman is playmaker, but he’s willing to play anywhere, including the line

Last year, Sylvan-Lucas fullback Beau Batchman rushed for 1,400 yards and collected 101 tackles at linebacker. The versatility earned him first-team all-state as an all-purpose player. Batchman has been at other positions, too. He started on the line as a sophomore.

Batchman has had stints at quarterback, tailback, linebacker, nose guard – and even subbing at center in 2018. Sylvan-Lucas starting center Tra Barrientes had to leave a game because of a helmet issue. Batchman, without being asked, switched from fullback to center.

“That’s just kind of his mentality,” coach Ben Labertew said. “He’s not a real selfish kid. He is going to do what the team needs, and that’s fun to coach.”

After five straight non-winning seasons, Batchman has helped the Mustangs post marks of 6-3, 8-2 and 6-4 the last three years. Last year featured five shutouts, including a 44-0 victory in Week 9 bracket play, the first postseason win in Labertew’s 15 years as a head coach.

“They took a lot of pride in it,” Labertew said. “They did a good job with it, and it’s going to have to happen this season, too, if we want to be competitive, we are going to have to play defense.” 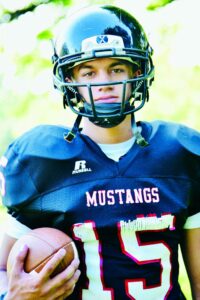 Beau Batchman is a top defensive players, as he racked up more than 100 tackles last season. (Photo by Kim Rayas)

Labertew said Sylvan-Lucas was “fairly disciplined” on defense. Batchman believed the unit took a team-first mentality, and “no one on the defense really cared” about individual statistics, such as solo tackles.

“We all flowed to the ball,” Batchman said.

Sylvan-Lucas earned a signature 52-48 road district victory at Thunder Ridge in Week 5. Thunder Ridge eventually finished 5-4 and should be one of the top Division II teams this year. The Mustangs trailed by 16 at halftime and were down 10 with 10 minutes, 33 seconds remaining.

“We just weren’t playing like ourselves in the first half,” Batchman said.

Batchman was among the players who made big plays late as Sylvan-Lucas scored 20 unanswered points in the fourth quarter.

“It was a matter of just saying, ‘Hey, you either show up and play or we are going home early,’ and I thought our kids did a good job coming out of the locker room,” Labertew said.

This season, Batchman is again expected to have a multi-faceted role for a squad that will have about 16 players out. He and Kilby Meyer are the only seniors. Barrientes, Logan Buttenhoff, Dawson Rhudolph and Marshall Hurlbut are returning junior starters.

“If we just work together as a team, I think it’s going to be pretty hard to beat us,” Batchman said. “… We just have so many guys that like playing football.”

Beau is the son of longtime Sylvan-Lucas assistant coach Ryan Batchman and his two older sisters, Courtney and Logan, were former Mustang standouts – Logan won the 1A shot put in ’18 – and both currently participate in track at Fort Hays State. The sisters always woke up Beau to go to the weight room.

“Beau shows up, he practices kind of like he plays,” Labertew said. “He practices hard.”