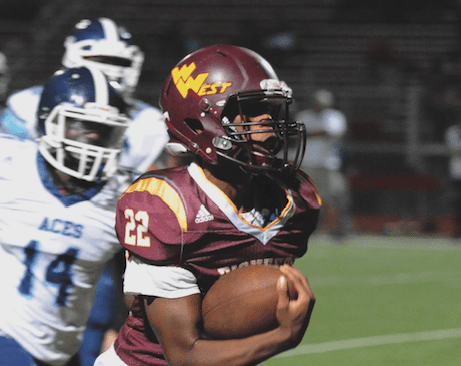 Watch out for Wichita West football over the next three seasons. Does that seem like a bold prediction for a team that went 6-4 in 2018? Not if you know what coach Weston Schartz does.

“That (2018) freshman class is loaded. We only gave up 14 or 21 points and they scored 350 on the season,” Schartz said. “We beat Carroll like 77-0 and Northwest 65-0. It’s back to the old West High freshman teams that were really, really good. It’s the best freshman team in however many years I’ve coached.”

Two of those freshmen started varsity for West – Quentin Saunders and Jerome Ragin. Saunders won the Class 6A 170-pound wrestling title in February.

“He’s in a class by himself,” Schartz said. “He’s smart. He knows the game. He tackles well, has great speed, great size. He’s a world champion wrestler who can play football. He’s just a very gifted athlete.”

Ragin started every game as a freshman.

“He’s big, strong, good in the weight room – he’s physically way beyond his years in the weight room,” Schartz said. “He’s smart, does the job and is another good student. If you’re starting at middle linebacker for 10 games as a freshman, you’re pretty good. We gave up like the fifth fewest points in 6A.” 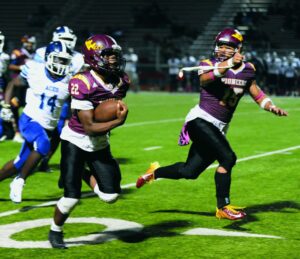 West allowed 20.3 points per game. But West’s talent doesn’t stop with a pair of sophomores. Schartz believes the Pioneers can move into the top two in the City League because of its experience and talent returning. West returns five offensive starters and eight defensive starters.

“… We’ve got more depth. We still have a difficult schedule, but that’s going to be something we have to overcome.”

Defensively, West will be strong in the secondary with Jeremiah Brown, who led the team in tackles, and Jqwon Johnson. Ragin will be at linebacker and Saunders at defensive end. Leon Dixon also is back at defensive tackle. Offensively Saunders and Jomarion Nelson will be key at running back. But the offensive line returns four of five starters, including Kaleb Pless and three-year two-way starter Isiah Canidy.

Derby is the defending Class 6A champion and returns senior running back Tre Washington and senior quarterback Grant Adler. Adler missed the last half of the season after suffering a season-ending injury in a win over Bishop Carroll in September 2018. … Of the remaining 6A teams in the area – Campus, Hutchinson, Wichita East, Wichita North, WIchita South and Wichita Southeast – only Campus had more than three wins. Campus finished 6-4.

Hutchinson did push Topeka, which lost to Derby in the semifinals, in a first-round playoff loss 45-43.