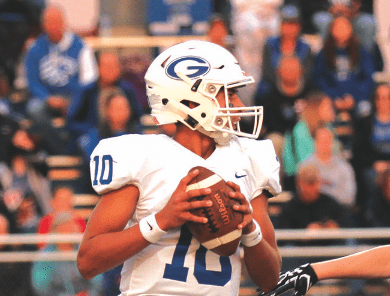 When you are a standout athlete, people are usually watching. When you combine that talent, though, with having great characteristics and a great work ethic, you seem to standout even more.

Despite his success athletically, Semrad is also known to be successful in the classroom. Semrad currently has a 4.2 GPA. He said he’s been raised to have the mentality to work hard in the classroom, and to always bring the best.

“Academics are everything,” Semrad said. “I like to put myself in challenging classes. I surround myself with intelligent people.”

That “to be the best attitude” translates to the way he carries himself. Goddard’s football coach Tommy Beason believes he gets a lot of credit for his play on the field but that there are many other great components to him. 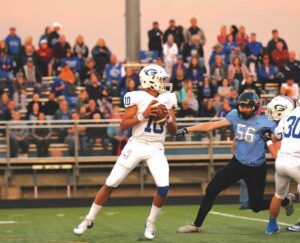 The way he treats his teammates and the people around him translates to his leadership qualities on the field, and his play in general.

“Coverage making sure I’m making the right reads and stuff like that,” Semrad said. “You know mentally being a leader. Just passing game correcting my form.”

Beason said that each season Semrad has consistently improved his game.

“He’s so much bigger and stronger every season,” Beason said. “I don’t think he’s touched his potential just yet.”

Semrad hopes to get the team back to where they ended up last season. Last season, the Lions made it to the Class 4A state title game with a loss to Bishop Miege.

“We’re looking to get back to that state title,” Semrad said. “Making sure every part is fitting where it should be and making sure we are ready for post season.”