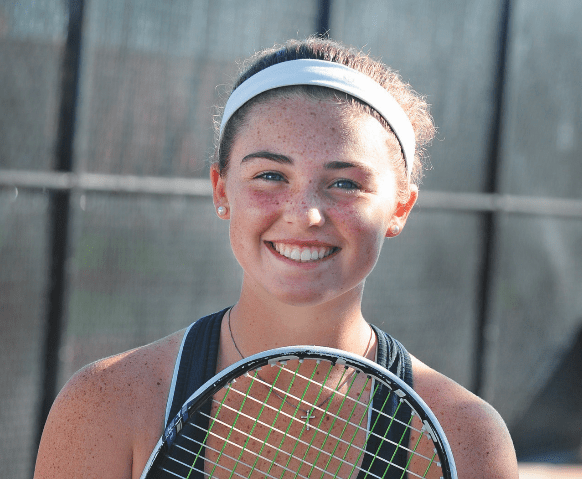 A Good Decision: Kapaun’s Whitaker almost quit sports, but now is one of top tennis players around

After Clara Whitaker had gone out for soccer, dance, tennis and golf, she went to her parents and said she didn’t like to sweat while doing sports. Her dad, Camden, laughed as he retold the story.

“We told her, ‘you can get a job or try sports again,’” he said. “She revisited tennis and fell in love with it.”

By her sixth grade year – a year after starting to play in competitive tennis tournaments – Whitaker’s game had progressed dramatically. While she failed to make it past the first day of tournaments as a fifth grader, by sixth grade, she was making it through three days of competition. Now a junior at Kapaun Mount Carmel, Whitaker is looking to win her third Class 5A singles title and help the Crusaders win the team title. Bishop Carroll edged Kapaun by five points to win 5A in 2018. Kapaun took third by seven points in 2017. The Crusaders won team titles from 1985-90, and in ’93, ’94, ’95, 2000, ’01, ’05-’07, ’11. As team-oriented as Whitaker is, she loves that she can control her own destiny on the court.

“If I play bad, it’s on me,” she said. “I know what to do, to work harder. In doubles it’s fun to play with someone because you have so much fun out there. You can keep each other motivated. And I love sports with a lot of movement. My siblings play golf, and that’s really long, a slow day. I like movement.” 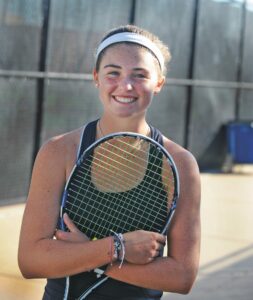 Whitaker’s sister, Emma, is a junior golfer at Oklahoma State who qualified for the U.S. Amateur over the summer. Their brother, Asher, is an eighth grader excelling at golf, as well. Clara Whitaker played in the Billie Jean King 16s national championships in San Diego, which invited the top 256 ranked players.

“She went out there and got a win,” Camden Whitaker said. “In the second round she wound up getting a bad draw and played the No. 1 person in the country. She hung with her. It was a great experience for her, and there were a lot of college coaches out there.”

Whitaker has a strong overall game – and is improving.

“She has a lot more weapons and shots in her repertoire,” Kapaun coach Kathy Schulte said. “She keeps developing. Her volleys have been fine, great comparatively. But they’ve gotten up with the rest of her game. Her groundstrokes (in a tournament on Sept. 7) were just amazing. And her serve continues to get stronger and stronger. It’s so consistent. Her volleys are really penetrating, and she’s ready to be up there at the net. That will finish out her game for college.” 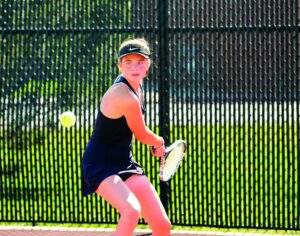 Whitaker’s focus this season has been her continuing quest to strengthen her mental game.

“I’m working to relax and stay calm,” she said. “I get anxious with my matches and really tight, so I try to relax and not focus on the other person. Tennis is so tough. You want to win. When you make a mistake, you get so mad…. I feel like when you get mad, it gives the other person more confidence.”

Whitaker also noted that she is relishing her morning workouts than she did last year. But her father and Schulte both noted that Whitaker has never lacked for drive or work ethic.

“The great thing about my kids is they enjoy practicing, getting better,” Camden Whitaker said. “It’s not a push to tell them to work. It’s on their time. They set up the time with coaches and the time they go work out. They’ve taken control of their own athletic careers. These kids might be special because they weren’t being forced to do anything. It’s their own motivation, their own drive to get better. It’s really fun to watch.”