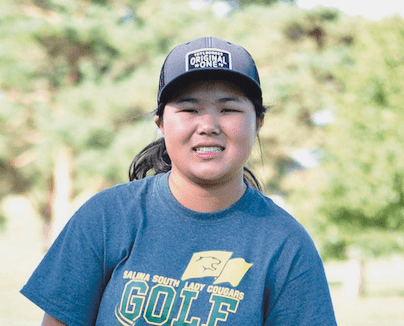 “I know the challenge of qualifying for four state golf tournaments,” said Hooper, who played golf and football at Bethany College. “She’s got the first one checked off.”

Norton remembers tagging along with her father John and her older brother Parker at an early age.

“I started when I was 2-years old,” Norton said. “I’ve literally been playing golf my whole life. I started with the First Tee program when I was 5 years old in Salina.” 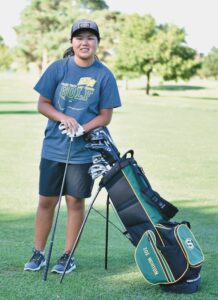 Norton said she always enjoyed being outdoors and spending time with her father has insured a lifetime connection.

“I’ve always enjoyed practicing and seeing results quickly,” she said. “It’s an individual game where you rely on yourself.”

“It’s very positive, which makes it fun. I love that the other girls are very supportive,” she said. “When someone hits a poor shot, another player will say, ‘Get it next time.’ You’ll always hear ‘good shot,’ when you hit a good one.”

Norton’s favorite clubs are the Ping hybrid club and a 6-iron she strikes from middle distance.

“Right now, I’d have to say my hybrid club is my favorite,” she said. “I bought a new one this summer and immediately hit it well. I have a lot of confidence hitting it off the fairway. 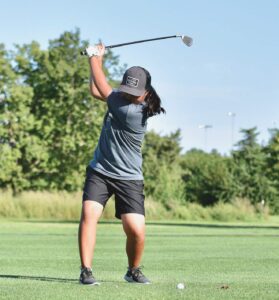 Norton said her goals are to improve, keep her scores as low as possible and qualify for 5A state for the second time after tying for 39th last year at Hesston Golf Course.

“Right now, I’m focused on high school golf,” she said. “But someday I would love the opportunity to play college golf.”

“What I like about Zoe’s game is the way she manages her game,” he said. “She’s minimizes her mistakes and  doesn’t score a high number.”

Hooper said Norton has built a solid tee-to-green game, which is her foundation.

“Zoe is very steady,” Hooper said. “She hits it down the fairways and her approach shots are around the green. Her biggest strength is her accuracy helps her stay out of trouble. How she scores depends on her short game that day.”