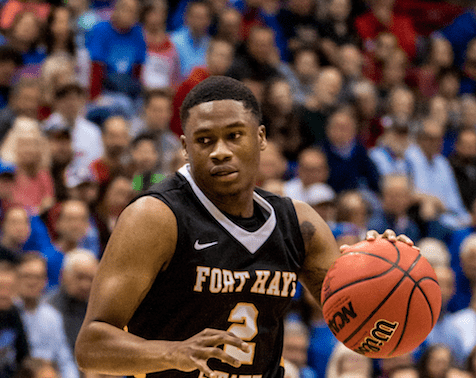 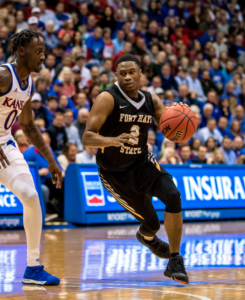 LAWRENCE – Playing in Allen Fieldhouse was always a dream for Aaron Nicholson and Nyjee Wright. Both players grew up watching the Jayhawks win the Big 12 Conference title on a regular basis and play in the NCAA Tournament.
Now, the former Derby Panther standouts and current members of the Fort Hays State Tigers, can say they played against the Jayhawks twice during their college careers.
Nicholson, a fifth-year senior, and Wright, a redshirt sophomore, matched up against the Jayhawks last week in an exhibition game in storied Allen Fieldhouse. The Jayhawks pulled away in the second half for an 86-56 victory over the NCAA Division II Tigers, but the final score was secondary to the overall experience for both players.
Nicholson, a 5-foot-9 starting guard, has been to Allen Fieldhouse before – he played there as a sophomore in 2017 – but said it was still a big thrill to step on the court and play against the nationally-ranked Jayhawks.
“Yeah, obviously it is,” said Nicholson, who finished with four points and a steal. “The atmosphere is great; it’s loud as heck in here and honestly, it’s one of the top three places you would want to play once in your lifetime – them, Duke and probably Kentucky or someone like that.”
Wright, a 5-10 guard, played eight minutes against KU two years ago as a true freshman, but played 24 1/2 minutes last Thursday and finished with eight points, five rebounds and three assists off the bench.
“I watched KU a little bit (growing up), but never realized how much of a great experience it would be,” Wright said. “I don’t think anybody will until they get here and are actually able to get on the court.” 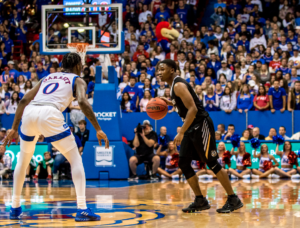 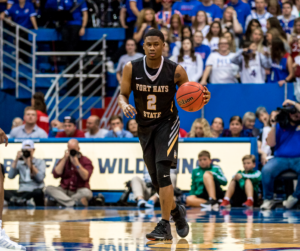 Nicholson and Wright, now in their third year together at Fort Hays State, played one year together at Derby High School during the 2014-15 season. Nicholson had played at Wichita Northwest for two seasons before transferring to Derby after the first semester of his junior season.
Nicholson was all-league first team and honorable mention all-state as a senior, averaging 13.8 points and 3.0 assists per game. Wright was a sophomore on that Derby team that qualified for the Class 6A state tournament and finished with an 18-5 record.
Nearly four years later, Nicholson and Wright are still teammates, as well as roommates and close friends.
“It’s been really fun,” Nicholson said. “He’s my best friend and we’ve just been growing closer ever since I moved to Derby. It’s been really fun playing with him. Hopefully, we can make some noise in the MIAA this year.”
Wright finished his high school career in 2017 with 1,120 career points – second on the school’s all-time scoring list.
“Aaron is probably my best friend,” Wright said. “We spend a lot of time together on and off the court.”
Both players are looking for big things from the Tigers, who open their regular season Nov. 8 at Arkansas Tech. Fort Hays State was fourth in the MIAA standings last year – behind unbeaten national champion Northwest Missouri State, Washburn and Missouri South – and are picked to finish fourth again this season.
“I think we can be really good,” Nicholson said. “We shoot the ball really well. The big key for us will be defense.” 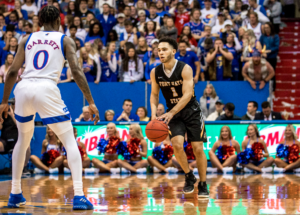 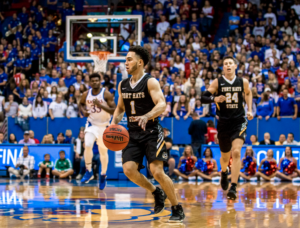 Nicholson averaged 9.0 points a game last year while starting 26 of his team’s 29 games. The FHSU coaching staff is looking for more production on the offensive end this season.
“They’ve instilled confidence in me, always telling me to be ready to shoot,” Nicholson said. “I get to the gym before practice and get up as many shots as I can. (The coaching staff) has been trying to push me to shoot the ball a lot, ever since my sophomore year.
“It’s just basically confidence for me and that’s why I try to get as many reps as I can. Hopefully, it will carry over to the games.”
After the KU game, Nicholson was asked at the post-game press conference about playing against a team as talented – and big – as the Jayhawks. He had spent most of his time on the court playing against 6-5 sophomore Ochai Agbaji, 6-6 freshman Christian Braun or 6-8 freshman Tristan Enaruna.
“I don’t think we’ll face another team as long as them the rest of the year,” Nicholson said.
Head coach Mark Johnson, sitting next to him, turned and gave him a look. The remark drew laughter from the media on hand.
“They really just pushed us out of all our offense and just denied us everywhere,” Nicholson said. “They were pressuring the ball full court, so it was tough for us to get into our offense. We just basically had to put our head down and go.”
Wright said the experience will only make the Tigers better.
“It’s just a great experience and I’m thankful to be here,” Wright said. “I think we’re getting better. It might not have shown it tonight, but we’re playing hard and getting better as a team.
“It was definitely fun, it’s always fun here. It’s crazy; these guys have a lot of wings.”