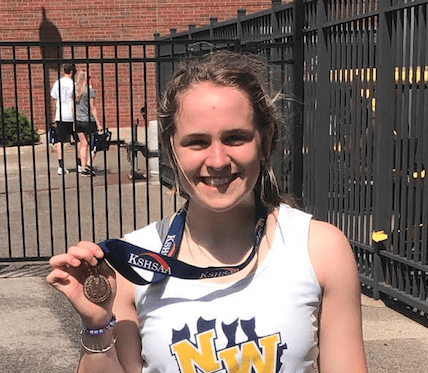 There are many great high school athletes, but Wichita Northwest High School senior Blair Sebastian is known to be a diverse athlete.

Sebastian is a four-year member of the cheerleading squad at Northwest. During her time as a cheerleader at Northwest, she has been selected as a three time – all American, and two-time top all – American. Sebastian is also a member of the track and field team at Northwest. She competes in the 100m, 200m, 4x100m relay, long jump and triple jump.  She is a three-time state qualifier in the long jump and triple jump. Sebastian also holds the school record in both these events.

Sebastian began cheering at a young age. She grew up around cheerleading because her mom used to help coach at Friends University for a few seasons and is now the head coach at Northwest. She competed in competitive cheer from the second grade until her freshman year. Despite not being involved in competitive cheer anymore outside of high school, Sebastian stuck with it.

“We spend a lot of time together,” Sebastian said. “We are together for most of the year. 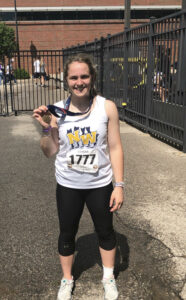 It’s really fun because everybody knows who you are, and it creates a good atmosphere for game days and stuff like that.”

Sebastian got involved with track in middle school. She grew up playing soccer and her mom noticed she was a fast runner. She started out by competing in sprints and the long jump. The triple jump was added to her list of events in high school. Sebastian hopes to compete in track and field after high school.

“She was pretty adamant about me going out for the track team,” Sebastian said. “It just kind of took off from there and I haven’t stopped since.”

Sebastian hopes to get back to the state meet for her last season.

“I am hoping to do really well again,” Sebastian said. “It was my goal to go to state all four years since I was a freshman.”

Northwest Head Track and Field Coach Ron Russell said that Sebastian is an athlete that stands out amongst her peers.

“Blair is one of the finest all-around athletes I have ever coached,” Russell said. “She is an all-American cheerleader, the unofficial MVP of the powder puff game two years running, and a gifted track and field athlete. Great academic achievements as well. I look forward to her senior season!”