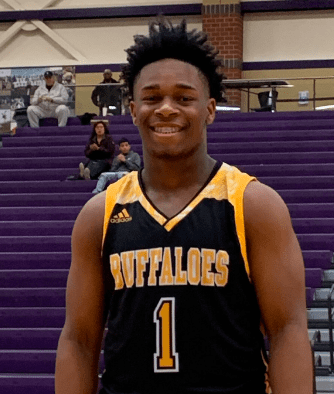 If you have a story you think I should do, email me at [email protected]

Shortly before Wichita Southeast played for the Valley Center midseason championship, junior Jackie Johnson was told he was two points short of 1,000 points for his career.

“There wasn’t any pressure,” Johnson said. “I just wanted to win the championship.

“It means a whole lot. I have worked really hard. It’s a blessing from God. For me to be in the right position, with coach trusting me with the ball in my hands and my teammates getting me the ball.”

Johnson scored 29, 35 and 29 points over the three games at the Valley Center tournament as he helped lead the Buffaloes to the title.

While Johnson, who played his freshman season at North, scores a lot, that’s not alway his focus.

“It’s about me being the leader — plug in the holes where we’re lacking, whether it’s defense, scoring, guarding the other team’s best player,” he said.

Southeast has struggled this season at times — the Buffaloes (6-5) have won four straight after starting 2-5 — and Johnson sat out several games due to an injury.

“It just means more when you win,” Johnson said. “It don’t mean nothing to put up 50 and lose. I’d rather put up 20 and win than 50 and lose. I want to do whatever it takes to help my team win.”