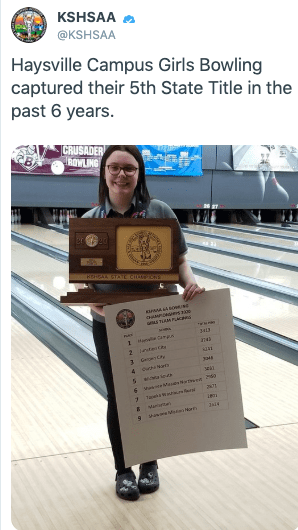 Congratulations to Bishop Carroll’s Blake Albers on winning the Class 5A boys bowling title by rolling a 766.

And congratulations to Salina Central on winning the Class 5A boys team title with a 3661.

Congratulations to the Campus girls bowling team on winning its fifth Class 6A title in the past six years.

Congratulations to the Salina South bowling team on winning the 5A title with a 3212, and to Andover Central’s Jadyn Barr winning individual honors with a 703.

Derby finished second in Class 6A after no Derby bowlers qualified in 2019.

Derby tied with Garden City, but its next score was 27 pins higher, giving the Panthers the edge.

The Wichita South girls took fifth, and Julianna Shear finished fifth with a 634.

Wichita Northwest’s Brandon Bonta took second in 5A with a 763, while Eisenhower’s Peyton Montgomery was third at 751.

In the team race, Salina South took second, 60 pins behind Salina Central. Kapaun was third at 3492.