Jeb Carlson and Logan Gamble started playing tennis together in first or second grade at Hesston’s tennis camp. By sixth grade, the duo was playing three hours a day.

“It was basically eat, sleep, tennis,” Carlson said. “I don’t know how it happened. It’s like an addiction. You want to be with your friends, it’s nice outside, there’s nothing else to do so you hit together. It was really fun.”

Gamble added: “One of the good things with Jeb and I is we push each other with anything we do, especially with tennis. We’ve been friends for so long, that if one does good, the other has to do good. It was the same for school, also in robotics.”

Carlson and Gamble lost their final season together after the Kansas State High School Activities Association canceled the spring sports season due to COVID-19.

And they missed out on their goals.

Carlson, who played No. 1 doubles all four years, got sixth place at state each of his three seasons.

“That’s kind of disappointing,” he said. “It was consistency, but I wanted to do better.”

Gamble was Hesston’s No. 1 singles player all four years. He qualified for state three times, finishing fifth and sixth. He was also a two-time CKL singles champ.

“I was hoping to at least make it to the semifinals,” Gamble said. “Last year I played really well against the state champion. I almost had him. If I had been a little better….

“I wanted to get to the semifinals, if not make it to the final. As a team, I wanted us to at least get a trophy.”

While Carlson will play tennis at Bethel, Gamble is finished playing and will attend Hutchinson Community College.

While they’re going their separate ways, they’ll still be close because their friendship went beyond tennis.

Both earned their Eagle Scout badges and took a 65-mile canoe trip. In robotics they worked the whole year on their design and won the state robotics championship and the design award. 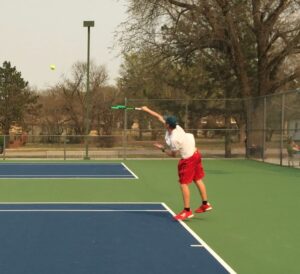 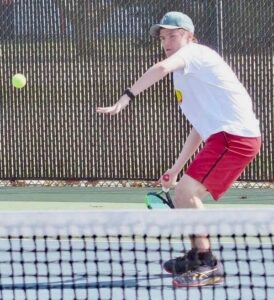