Ideas are born from necessity. The uncertainty of the 2020 season left many booster clubs and athletic programs wondering what the new season would look like. It also left them wondering how they were going to raise money for the teams. Enter Kristen Goodnight and husband Alan Goodnight. Members of their sons’ high school football booster club, the typical fundraisers were no longer an option due to the situation with COVID-19, giving birth to Oz Esports, a gaming or esports tournament allowing teams to compete in an activity most are
doing at home anyway.

“My husband and I are highly involved with our sons’ high school football team and booster club. Early this spring and summer, due to  Covid-19, we had to cancel our annual mulch sales and golf tournament, our two biggest fundraisers of the year. As a result, we developed this idea to raise money for the team that was safe, easy and fun,” said Kristen.

The gaming community has reached new heights with high schools and universities creating Esports teams to compete and represent their schools. Oz Esports is capturing the most popular form of entertainment in today’s household.

“Online gaming is the No. 1 entertainment choice among teens in 80 percent of U.S. households. Schools across the country are adding Esports programs and initiatives to their districts. So, given the popularity, it made sense to develop a fundraiser that was fun and competitive for teens, easy for parents and coaches, and profitable for the team,” said Kristen. 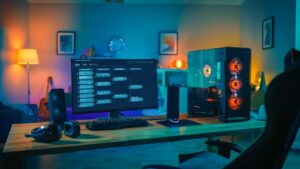 Unlike other fundraisers, Oz Esports makes the process simple and easy for parents and coaches. No more hauling pounds of food products or spending the afternoon at a hot golf tournament. It’s as simple as setting a date and spreading the word.

“The process is simple. The team or booster club will select a date and time for the event and the game or games they wish to play. Our team can have the tournament registration live and ready to promote within 24 hours,” said Kristen.

The fun factor for the athletes and parents is unlike any other and it gives the players an opportunity to bond in a unique way.  Josh Wolfe, a junior on the Andover football team said, “the tournament was very fun to play in.”

Feedback from the players and parents was nothing but positive.

“Our experience and feedback from the Andover High School football tournament was fantastic. It was not only fun and competitive but a great bonding activity for the team. We also incentivize the players by providing cash and/or prizes to the winners,” said Kristen.

Setting up a tournament of this kind may seem like a daunting task, but Oz Esports handles everything from set up to custom graphics and marketing.

“Oz Esports will set up and manage the event, tailored to meet your teams’ specific needs. We will help you promote the tournament to your audience, by providing custom event graphics for social media, email templates and marketing strategies to ensure a successful event,”
said Kristen.

There are many different types of games a team can use in tournament style play. Oz Esports allows the team to select the game
or games they would like to use for the competition.

“The team will pick the game or games they wish to play. Since Oz Esports can host the tournaments simultaneously, teams can pick up to three games (or options) for their event. This gives players more variety to choose the game they wish to play. And our multi-platform software allows players to participate on any gaming device,” said Kristen.

There is no limit to the size of the team as the tournaments are set up in a 1 vs. 1 single elimination bracket format. Oz Esports can set up the tournament to be private or allow unlimited participation.

“There is no upfront cost and the team is guaranteed 70 percent of the proceeds, which is about three-times the return of most traditional fundraisers. Once the event is completed, the team will receive its’ proceeds quickly, within five to seven business days,” said Kristen.

To learn more about Oz Esports visit their website at OzEsports.net. Registration is done through PayPal. There is a minimal entry fee/donation to compete in the tournament and your registration is live within 24 hours.