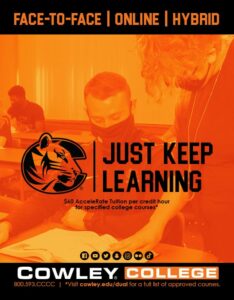 Melody Ukoefreso from East was chosen as the Wichita Large Schools Preseason Volleyball Player of the Year.

Ukoefreso, a senior, was a first team all-league hitter last season for the Aces. “It means a lot to me that I received the support of so many people,” Ukoefreso said. “I was surprised because people who I had never met came up to me and told me that they had voted for me.

A lot of my peers and fellow teammates were big advocates for me during this entire process. 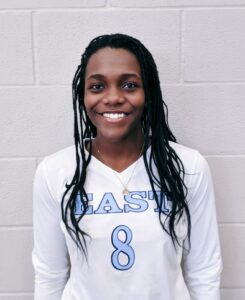 I thank Coach Head and all of the coaches that I’ve had for teaching me so much to make this possible.”

Last season, Ukoefreso registered 356 kills, a hitting percentage .348 and 8.9 kills per match. Along with being an all-league player,  Ukoefreso was also selected to the Derby Invitational and Andover Invitational all-tournament team.

Ukoefreso said there are several areas of her game she is looking to improve this season, but becoming a better hitter is one of them.

“One of my goals for this season is to become a smarter hitter,” Ukoefreso said. “Hitting hard is good but knowing where to place the ball on the court is even better.”