On September 11th, the Tigers of Eisenhower took on Salina Central in what would turn into one of the best games of the early season.

In a 45-42 overtime victory, Eisenhower showed they have the ability to come from behind and make the plays when it counted the most. 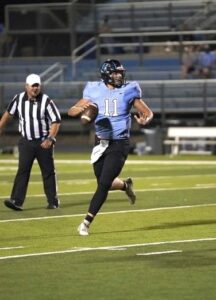 Fullback/linebacker Cody Hawks (Jr.) was a standout player with three scores and 16 tackles with one sack for the Tigers.

Early in the game, the Central Mustangs scored the first two touchdowns, but Eisenhower kept their focus and on the first play of the second
quarter, Nick Hogan (Sr.) tossed a 9-yard TD to Cade Friend (Jr.) to get the Tigers on the board. 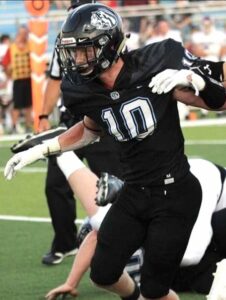 Friend would add a 30-yard TD run just before the half.

Cody Houser (6-1, 175, Sr.) snatched an interception from his free safety spot and returned the ball 45-yards for a touchdown, which tied the game.

But Central was not done, grabbing a quick score just before the half to go up, 27-21. 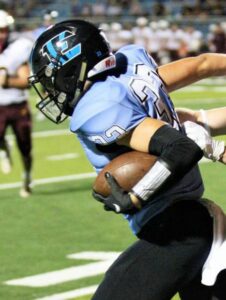 Hawks would put two of his three touchdowns on the board in back-to-back scores making it a 34-27 game. Central responded with another quick score, but Hawks and the Tigers had an answer.

Hawks punched one in for his third TD of the night and the Tigers went up, 42-34 at the end of the third quarter.

A potential game winning field goal was blocked, and Central scored to tie the game at 42 with :51 seconds on the clock. The Eisenhower defense really stepped up in overtime to get a big stop on 4th down. Central got the ball down to the two yard-line but were pushed back on second and third down forcing fourth down.

After the Tigers failed to get into the endzone, Eisenhower’s kicker, Carlos Virdio nailed a game winner from 21-yards out to give Eisenhower the win in OT.

Post Views: 0
In this article:Eisenhower, Featured, Football, Team of the Month