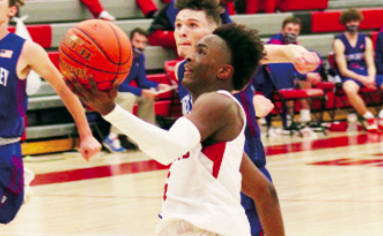 Adriel Smith of Rose Hill was chosen as the Hog Wild Performance of the Month after he scored 32 points in the Rockets’ 74-58 victory over Andale on January 12. Smith is averaging over 26 points per game this season.

“Scoring has always been something I’ve worked on,” Smith said. “Getting to the rim, jump shots, mid range game—I’ve always wanted the big responsibilities and shots so I put a lot of hours into the gym.”

Smith transferred from Wichita East after last season concluded so he could play for his brother, Adrian Maloney Jr., who is on the Rockets’ sta . Smith has noticed something in particular about the style of play from the City League to the AVCTL.

“The biggest di erence I’ve seen in the style of play from City League is more up and down with the tempo, while the AVCTL is more half court and running sets,” Smith said.

The Rockets graduated several seniors from last season’s team that made it to the 4A semi nals and have had to replace those players with several newcomers. Smith said there have been ebbs and ows in chemistry with having so many new players, but it is starting to click.

“We came in developing chemistry right away in the summer and it has been growing since then,” Smith said. “Every team goes through their ups and downs but we’re overcoming them as they’re thrown at us.”

Basketball is the only sport for Smith and he wants to play in college after he graduates next season.