The desire to play softball was likely implanted in Kennedy Topping even before birth.

“My mom went into labor at the baseball field,” said Topping, of her mother, Maggie, who was watching Jeff Topping coach at Heights when her water broke. “It was ingrained in me. I grew up loving it. My best friends are from softball. My family centers around it.

“It’s a personality trait in me.”

Topping plays shortstop for Maize softball, while her sister Hadley is a freshman who starts at first base. Their dad, Jeff, is a Maize assistant coach.

“This year I get to watch Kennedy and Hadley practice every day,” Jeff said. “It’s been a great experience just to watch them grow as athletes and in softball and mature. It’s been really rewarding.”

Jeff spent 21 years coaching Heights baseball, 12 as the head coach. But when Kennedy neared high school, he knew he wanted to be a part of it.

“I sat down with them – is this something you want or not?’ he asked. “‘If you don’t want me coaching you all the time, I understand.’ Both said they were up for it. They wanted it.

“Now I get to coach them for three, four months. And then they go off and play for other people in the summer, and I concentrate on Blakely.”

Blakely, who is in fifth grade, plays for the Hooligans along with Kendall Meirowsky. Jeff and Maize coach Jenny Meirowsky both coach the team.

While Jeff started coaching Kennedy and Hadley in softball around age 5, it’s a little different having Jeff with the high school team.

“In practice I’m Coach Jeff, just like Jenny is Coach Jenny,” he said. “After practice, I become dad. The girls have done a good job of separating dad from Coach Jeff…. I work to coach them up in practice and am more of a cheerleader in games.”

While it’s awesome to already be at the field if they want extra time hitting or fielding, it’s not easy being a coach’s kid.

“Playing for my dad is a real privilege,” Hadley said. “Sometimes we butt heads… Playing with my sister has been a real privilege. She leads in every which way…. I look up to her on the field and off the field.”

Kennedy added: “When I was younger, I got more feedback from him. Now that I’m older and in high school, he reminds me of things and lets me do my own thing and play my own game. In my childhood years, he coached me and taught me to be a respectful player and really know the fundamentals.”

One of the most special moments for Hadley was when Jeff sent her a text shortly before her first start on March 24. He reminded her of all her hard work and to have fun and play hard.

“Just knowing that he’s my coach but him also stepping back and realizing he’s my dad and giving me words was very special,” Hadley said.

Kennedy shines at shortstop, although she plays centerfield in the summer and she can pitch. Her goal is to play college softball.

Kennedy added:  “I’m hitting gaps and hitting more line drives. My dad always taught me that hitting is very important. This last year my hitting has increased and gotten up to speed.”

What Hadley loves to see is Kennedy’s confidence.

“She knows her reaction speed is great,” Hadley said. “She doesn’t show mistakes on her face as much as others. She’ll make a mistake and then pick it up and make another play.”

Hadley, who also plays volleyball, has always been a catcher, but Maize already has a senior catcher in Chloe Bartlett.

“Hadley is the backup catcher, and she swung the bat well early this spring, so she’ll start at first base due to her bat,” Jeff said. “But she can also play third. And the other night, after a couple pitching changes, we needed an outfielder. So we can put her in the outfield, too. She’s a little bigger, a little stronger, but not as fast. (Hadley and Kennedy) are two different sides of the spectrum.”

“She is a player who takes everything to heart and really cares,” Kennedy said. “She definitely shows more emotion than I do on the field. But as her sister, I know that is all because she is very passionate.”

Conversations about softball are the norm among the Topping girls and their parents.

“It’s an everyday topic at the Topping household, Kennedy said. “It’s a big part of the support.” 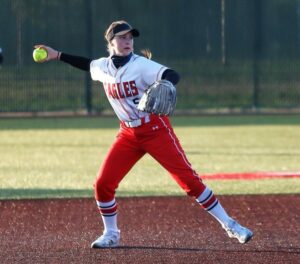 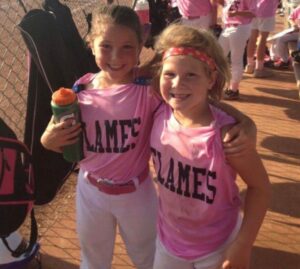