Put Heights junior Grant Pierce on the track and he’s just like any other athlete — competing for a win, a personal record, love of the sport.

He simply has a different mode of racing. A wheelchair.

“They see me as having a disability, but it’s very important that people don’t see it as being different.”

At Heights’ meet on Friday, there will be adaptive races in the 100 and the 400. Heights distance coach Brandon McMillen and the Pierces are pushing for more races at state, including the 1600.

“For five years I’ve been working with KSHSAA,” said Kary Pierce, Grant’s mom. “Our biggest advocate has been J Means. I approached him when Grant was in sixth grade (at Wichita’s Mayberry Middle School) and said, ‘hey, this is what he wants. He wants to race on his middle school team.’

“J said, ‘yep, let’s do it.’ It was ‘what do we need to get this going?’ I owe a lot to J. He has been our spokesperson for KSHSAA as far as going up there and pushing for this.”

Oftentimes there’s some confusion and whole lot of curiosity among the other runners as Pierce huddles with them before moving onto the track for a race.

“But after the first meet, we become really good friends,” he said. “We all race together, all encourage each other. It builds a community.

“The first time they are confused or concerned or unaware of what I’m doing or how well I’m doing. After that, I really think I earn their respect.”

His respect is deserved because he’s usually winning the race.

One opponent credited Pierce for reaching a personal record in a recent race because he was trying to catch Pierce.

“If he didn’t have the condition he does, I think he’d be a highly successful athlete,” McMillen said. “He’s super competitive. He likes to be the best. He likes to work hard. He’s got the same drive that the top athletes do, regardless of if he’s in a chair or not.”

Pierce has Bockenheimer’s syndrome, which is a vascular malformation that affects his left leg with pooling blood, swelling and blood clots. He has a leg length discrepancy and muscle deterioration, and an early form of osteoporosis.

Bockenheimer’s is a progressive disease, but when he broke his femur after finishing first grade, Pierce said he accelerated the disease by 20-30 years.

He has been in a wheelchair ever since and had 24 surgeries, including two where he nearly died.

Before that he was walking, running, playing t-ball, playing flag football.

“It basically ruined his childhood,” Kary Pierce said. “He was in the hospital for four months after his injury. He couldn’t go to school, was super depressed. We didn’t know at the time that he wouldn’t ever be able to walk again.”

At age 9, his physical therapist introduced him to wheelchair races in the Challenge Games in Derby.

“Being it happened at a very young age, (my family) kept me happy and got me doing things,” he said. “It involved sports — doing things outside, participating, doing athletic stuff and not giving in to my disease.”

Then the Pierces discovered the Endeavor games in Oklahoma.

“That’s when his whole world changed,” Kary Pierce said. “When we went there, he got to see there was lots of ex-military that compete there. It was, ‘hey, these people are like me.'”

Then came the 2021 state meet. Competing at state in front of thousands — and winning the state’s first two titles — was exhilarating for Grant Pierce.

“It was good to be out on the big stage in front of everyone,” he said. “It showed what I was capable of. It’s just a really good show-and-tell of how capable some people are.

“And whatever you think is possible, different people in the world can be competitive and do track.”

McMillen didn’t know much about how to train a wheelchair athlete, especially the science of the sport. So he searched out adaptive

“I talked to some coaches around the country, got some advice and how it works, watched different videos — it’s a whole new world,” he said.

“If you’ve ever watched the paralympics after the Olympics, they are some monsters out there…. Grant has plenty of experience that he can navigate with the runners and be completely fine.

In KSHSAA events, Pierce’s finishes don’t count toward team points because it’s still rare to have an adaptive athlete.

“Grant’s not that worried about getting his medals, but he still does like to win,” McMillen said.

His start is the slowest part of the race, so his 100 time is 16.12, more than five seconds slower than the best sprinters.

But as the distances lengthen, his times equal those of runners — and then pass them.

Since the state meet, McMillen has heard from other schools about their adaptive athletes.

“It’s exploding,” he said. “… When he’s gone, I will search for ways to keep helping with this. We’re bringing in the other wheelchair kids to our meet. We’re trying to really blow this up. I love it. I can’t stop talking about it.”

Pierce is often lumped in with those who have cognitive issues, but he’s a gifted student, is in the Biomed classes and is eying a career in plastic surgery or some form of podiatry.

Pierce has always had plenty of competitiveness in his system, whether it’s card games, video games, or any school assignment.

“After my injury, I really decided that I didn’t want to be a nobody,” he said. “I wanted to do something with my life and be impactful on the world. I push myself to be the best in every aspect of my life.”

Now he competes in track meets across the country on the paralympics circuit. He plans to compete in Phoenix in May for U.S. Paralympics, and then another huge meet in Denver in July.

He has offers from Illinois and Arizona, which both have wheelchair racing.

“I’ve always told him that he has to be the voice for those who can’t speak,” Kary Pierce said. “… There are learning disabilities for some who are in wheelchairs. They can’t think the way that he can think, so I tell him’ you have to use your voice to make that difference.’

“… He was homecoming king, he has a girlfriend, tons of friends. He’s smart, wants to be a surgeon. He’s strong and goes to the gym every day. He’s broken every stereotype of anyone in a wheelchair. Some of his friends have said, ‘we don’t see a wheelchair. We just see Grant.’

“He’s broken all those stereotypes, and he’s paving the way for the younger kids.”

Pierce understands that he’ll run into people who will assume he needs help because he’s in a wheelchair.

“I am very, very able and capable,” he said. “I rarely need help. I do a lot of things better than people who are not disabled.

“It’s not their fault. It’s ignorance, unknowing. It’s hard to teach everyone. But it’s important to present yourself on how people with disabilities can act.”

He knows he’s a role model. And he embraces it.

“If there’s any kids with disabilities that don’t think they can do this, just go out and try it,” Pierce said. “If you have a disability, don’t let it impair you. Know you are capable of doing things.” 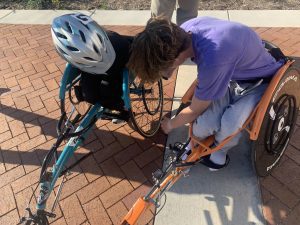 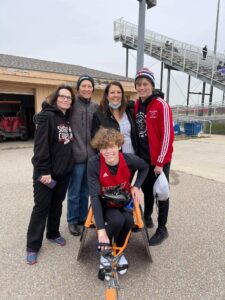