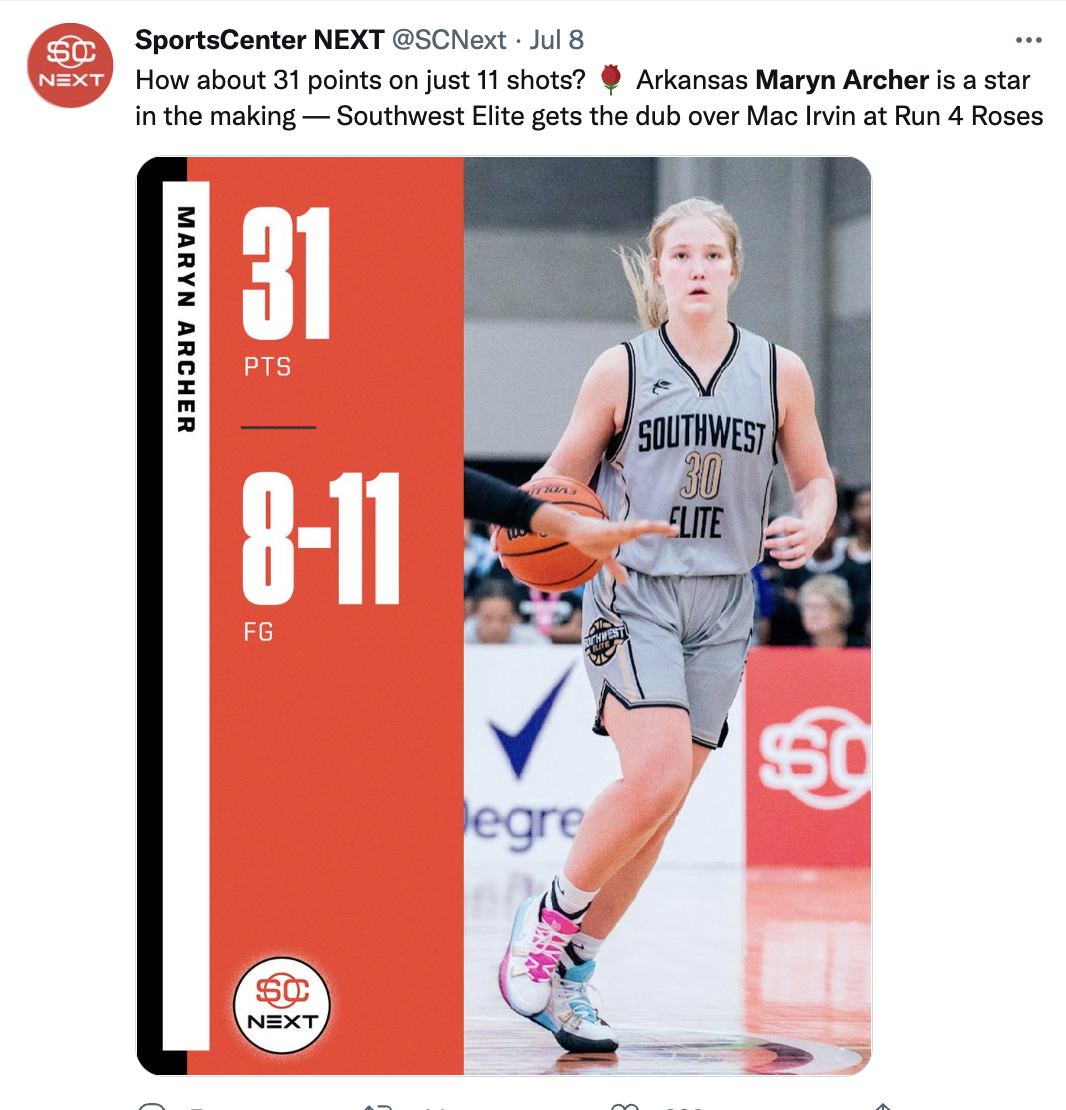 Derby senior Maryn Archer, who plans to graduate at semester, scored 31 points and had six rebounds as she helped lead her summer basketball team, SW Elite, to the championship in Run for Roses in Louisville earlier this month.

It was a thrilling finish to a devastating weekend that included an injury to teammate Ava Jones, who plays at Nickerson.

Jones and her family were hit by a car while walking on the sidewalk in Louisville. Jones’ father died on the day SW Elite won the Run for Roses championship.

“He passed the day of our championship game, and her entire family came to watch us and took a picture with us after we won,” Archer said.

Archer, who has committed to Arkansas, helped SW Elite go 3-2 in Indianapolis in a tournament that finished on Tuesday. She is set to play in Ohio later this month in the Select 40 championships. It’s a six-day tournament with two games a day.

She said the difficulty of knowing their friend and teammate was battling for her life brought her closer to teammates who also include Clearwater’s Carli Carlson and Salina Central’s Mykayla Cunningham.

“It’s been really rough,” Archer said. “We found out the day before the Run for Roses tournament in Kentucky. None of us slept that night. We turned around, woke up and played the next day. We were constantly getting updates about her.

“There wasn’t anything to do except play for Ava. That’s what motivated us. That boosted us. We definitely played with a lot of emotion. The main point of emphasis was to stick together, play for each other, play for her.

“We really came together. That was a true definition of a family.”

Archer, who helped get Derby into the Class 6A title game in March, has become a better player this summer.

“I have a couple of teammates who are sisters, and they run and they play so hard,” she said. “I’ve never seen people play harder than those two. We win a lot of games by pressuring. It shocks a lot of teams. We don’t look like a team that can do a lot of the stuff we do.

“My teammates find the open gaps, so they make it easy for me to find them. Then they make shots, and that opens up the lanes for me. We play well together.

“My coaches have helped us all and I’ve developed a lot because of them.”

Archer’s offense has been strong, hitting from the perimeter, midrange and getting to the rim. If she can’t find her shot, she’ll drive and kick out to teammates.

Her plan to graduate at semester means she will enroll at Arkansas where she will grayshirt so she can practice with the scout team.

But that also means she won’t play her senior season at Derby.

“I have really big aspirations for my career,” Archer said. “I know if I want to have an impact in college, being down at Arkansas a semester earlier and getting a start will help me develop so much.”

Archer said she talked to fellow Derby senior Addy Brown, who committed to Iowa State, about not playing their final year together.

“It took a lot of processing, but I had a lot of conversations with Addy, and she understands that it’s the best thing for me,” Archer said. “She’s always going to support me with that.

“It goes back to, if I want to be freshman ready, this will help me develop.”