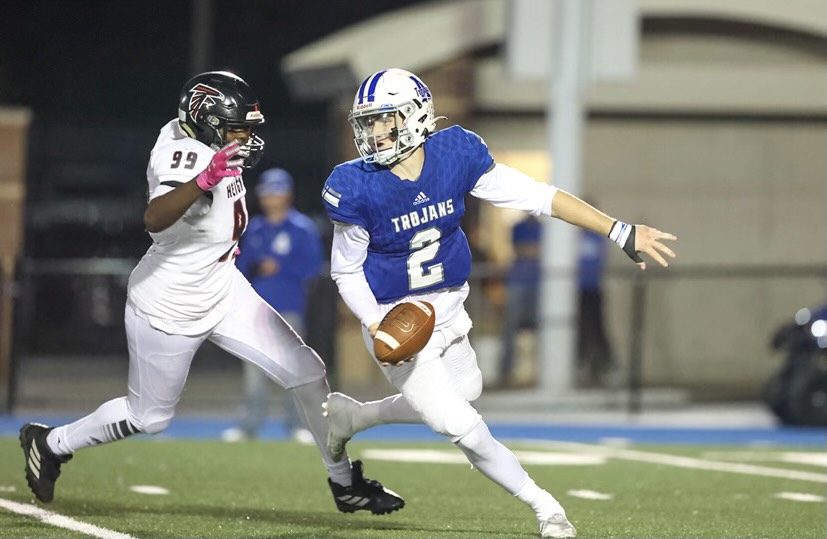 It has been an odd summer for Andover senior Brady Strausz. A three-sport athlete, he’s used to being constantly busy.

But after tearing an ACL in Andover’s basketball game against Maize in January, he’s been relegated to lifting weights and throwing.

“I’m not used to sitting there and stretching for six months, basically,” Strausz said. “I started playing golf just because I had nothing else I could do. I could chip and putt without causing any problems with my knee.

“During the physical therapy process, golf was a mental stabilizer. It kept me busy instead of me sitting home all day and thinking about how I can’t play AAU basketball for the final time.”

Strausz hopes to get cleared by Aug. 3 for the football season. He has been increasing the weight on his lifts and is nearly back to where he was before the injury. He’s not allowed to make quick cuts just yet, but he still throws passes.

In the season opener of his sophomore season, Strausz was carted off the field after spraining his spinal cord. He was back a few weeks later.

Then he tore the webbing near his thumb, and that wasn’t completely healed until the end of the 2021 summer.

During football his junior season, he fractured his clavicle and played through it. He returned for basketball but wasn’t able to shoot.

Three weeks after he finished his physical therapy, he tore his ACL and ended his junior basketball season.

“Not having the junior summer was a surprise, obviously,” he said. “I was invited to multiple camps out of state. I want to play football in college, but I didn’t get a chance to prove what I can do outside of my own team.”

Strausz’s strength is in the pocket. He has excellent footwork, can throw on the run and can read defenses well, which allows him to find the open receiver.

Reading defenses has been instinct for Strausz.

“I feel I’ve noticed things and I’ve seen the openings that receivers might not see,” he said. “It’s god-given. Obviously, athleticism is god-given, as well. I enjoy reading defenses. My goal is to figure out the defense and find a way to get someone open.”

Regardless of what happens this upcoming season, Strausz is looking forward to getting back on the field.

“It’s super exciting,” he said. “It’s a good way for us to find out where we are as a team, what we need to fix and what holes we need to fill.”

Strausz also plans to play basketball. The Trojans have a deep, talented corps of senior basketball players, and with Strausz running point, they are extremely difficult to beat.