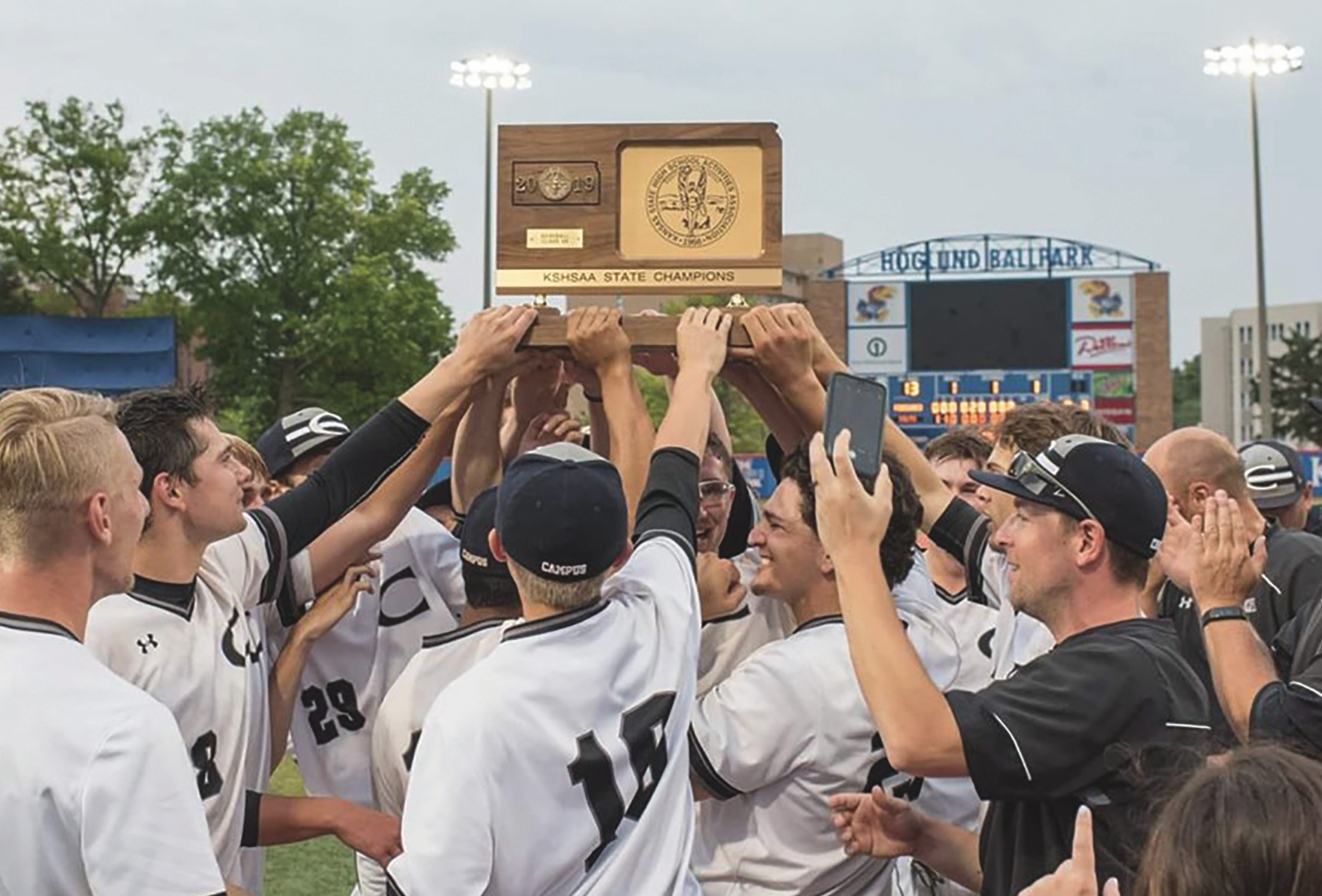 But if you had seen him or talked to him on May 24 or 25, you’d think differently.

“I have cried more in the last 24 hours, than I have in the past 24 years,” Clasen said. “And I’m not an emotional guy. I don’t even think I cried when my kids were being born.”

Those tears followed Campus’ 3-2 victory in nine innings over Lawrence Free State in the Class 6A championship game.

The tears weren’t just because of the victory – although that is especially sweet.

“Twenty-four months ago, we started a bunch of freshmen and sophomores, and we won six games,” Clasen said. “We were 6-15.”

It was a rough season.

“You could tell (the coaches) didn’t really enjoy it,” senior shortstop Tyler Kahmann said. “It’s not that they didn’t enjoy us, but we were 6-15.”

That season was spent getting the Colts to believe.

“We kept telling the kids we were close,” Clasen said. “We’d have one inning that would do us in, and it would unravel. The kids didn’t know how to win, how to get over the hump.

“You look back now and you laugh. ‘Remember what it was like?’ You’re preaching, hoping it happens. OK. The light bulb comes on and they know how to win.”

In 2018, Campus lost to eventual champion Blue Valley 7-0 in the 6A semifinals. Clasen points to a missed opportunity to turn a double play that led to five runs.

“To see the disappointment in their eyes,” Clasen said and then paused. “It was hard seeing it. You preach it and you preach it – ‘let’s try to get there.’”

“And then, at the end-of-the-year speech (in 2018), coach said, ‘it will be a disappointing season if we don’t get to the championship game,’” Kahmann said. “He had high expectations.”

It was a special season, too.

Campus earned the No. 1 seed with a 20-2 record. And instead of turning the state tournament into a business trip, Clasen urged them to have fun.

They played hacky sack. They played in the pool. They hit each other with pool noodles.

“I told them that we were going to party, screw around and see if we can win a state championship,” Clasen said. “We were trying to take the pressure off. Enjoy what we’re doing, live in the moment because these moments don’t happen a lot.”

But for the 6A title to happen, Campus needed two walk-off hits in extra innings from junior Austin Warkins.

In the regional championship against Junction City, it took 12 innings for Campus to win 13-12.

“It was well-fought on both sides,” Warkins said. “Going in, we didn’t expect it to go like that. But things happen. In that last inning, when I got up, they had walked Tanner (Leslie) and the bases were loaded.”

Warkins hit a grounder to the second baseman, who committed an error to allow Campus to score the game-winning run.

“It was the best moment in my life that I thought I’d ever feel,” said Warkins, who also threw the five extra innings with no runs allowed,

In the ninth inning against Free State, Warkins was confident. He’d been hitting well all postseason and just knew the game ended with him at the plate.

“I hit the ball over the right fielder’s head – and that was the best feeling in my life. Nothing will top that,” Warkins said. “Getting that state championship-winning hit for me team and my community? It’s a whole other level of a feeling when you can do that for your team.”

There were other key moments.

*The three double plays in the title game – Campus had eight in the state tournament.

*The three pitchers, who threw in the final game. Jack Hartley and Tanner Essley threw most of Campus’ innings during the regular season.

Campus only gave up four runs in the state tournament and four of the five pitchers are juniors.

Junior TJ Waits started the title game, then senior Kaden McMullin pitched. Then it was Warkins, who threw the final three innings and didn’t give up a run.

Adding to the emotion was the eight seniors’ last game.

And assistant coach Kevin McMullin, who was part of Campus’ previous title team that won in 1991, watching his son win a title.

By the time Campus had won its title, McMullin had already cried multiple times.

By May 25, a day after the win, McMullin got choked up again.

“I’m not all cried out yet, but I feel I’m pretty close,” McMullin said. “Two years ago we won six games. That can’t be lost. The majority of those kids were on this team.”

Derby entered the postseason with a 7-9 record but got two upsets to advance to the Class 6A tournament.

“Obviously when you’re not supposed to win, it’s always a great feeling,” Derby coach Todd Olmstead said. “We didn’t see winning as an upset, though. We played like we were capable of.”

Derby played top-seeded Campus in the first round of state and had ace Grant Adler on the mound. It was the third meeting between the two teams.

“We knew they were a good team, but we played them close both times and actually had chances to win,” Olmstead said. “Each time they found some way to get some things done, and we found a way to help them get it done. The game at state played out the same way.”

Bishop Carroll’s semifinal loss in the 5A tournament was an emotional one.

“We had a big group of seniors, and so we shared some tears after the game,” Carroll coach Charlie Ebright said. “Not so much about losing, but knowing that we didn’t achieve what we wanted to and … knowing that this was probably the last time these guys would ever play together.

“And with my son (Jack) being a senior, that got to me pretty good when I started thinking about it.”

“Offensively we went silent,” Ebright said. “We had one guy, Carson Pracht, who had more than two hits in two games. He had four hits in the two games combined and the most anyone else had was two.

“We had 16 fly ball outs and five ground ball outs. Those guys know better. We didn’t put any pressure on anyone’s defense.

The weather wreaked havoc on state championship weekend, especially with Class 4A. After starting on May 23 in Salina, 4A finally finished on May 27 in Maize.

Over nearly 12 hours on May 27, Nickerson played – and won – three games, including beating Buhler 8-7 to win the 4A title.

It was Nickerson’s fifth title and first since 2002.

Nickerson was the top seed in 2018 but lost in the first round.

“We were all heartbroken,” Schrag said. “We know we shouldn’t have went out like that. … Nothing we could do besides learn from it.”

While most were amazed at Nickerson’s three wins in one day, Schrag shrugged it off.

“We play in tournaments (in the offseason) where sometimes you have to play three games,” he said. “We were drinking lots of water, in between games we rested and got in the shade. We made sure to stay focused.”

What helped Nickerson was the connection among the players – many have played together since they were in elementary school.

“They all started pretty much as freshmen and sophomores, and they played a lot together in the summer,” coach Deron McCue said. “They know each other’s strengths and weaknesses. They have jelled for a long time.”

In the championship game, it was more than the seniors who stepped up.

“We had key players coming up at the right time,” McCue said. “It wasn’t just the five seniors. It was some of the underclassmen.

“… The difference between this year and last? Last year we had the target and this year, we were looking for the target.”

Buhler only had two returning starters from its 2018 team that qualified for the 4A tournament.

But the Crusaders advanced to the Class 4A title game with a young roster that included just three seniors.

“These guys worked all offseason; they knew it was their turn,” Buhler coach John Neill said. “They kept playing for each other. It was a very, very special group.”