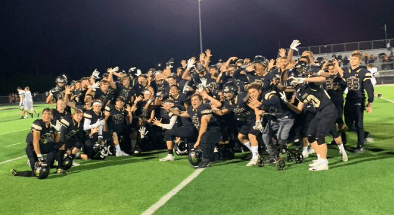 In a battle of unbeatens, it was defense that was the turning point as Maize South beat Andover Central 24-17 Friday night to improve to 5-0.

“We build our team around our defense,” Maize South coach Brent Pfeifer said. “And this is why — when you play  a really talented offense and you got skill guys like andover Central has, you’ve got to have guys who can stop them or it’s just going to get away real fast.”

Andover Central got a quick stop and score amounted to a tough task for the Mavericks very early in the game. The Mavericks bounced back quickly with a huge catch and run by junior Byron Fitchpatrick, which eventually turned into three points.

After an answering field goal by the Jaguars, it was pretty much all Maize South after that.

Junior Harper Kennedy had a huge one-handed pick six, which was just one of two defensive touchdowns. The other one was off of a scoop-and-score by senior Trevion Mitchell.

“We owe all of this to our defensive line,” Mitchell said. “They played a game. If it wasn’t for them, none of that would’ve happened.”

Andover Central did get a late score from receiver Xavier Bell and quarterback Shomari Parnell, but Maize South held firm in the final seconds.

Northwest beat Kapaun 45-0. Northwest improves to 5-0. The Grizzlies, after a 21-17 win over Bishop Carroll in the opener, have outscored opponents 214-22 in the past four games.

In the battle of undefeateds McPherson was able to best Buhler 21-14.

Belle Plaine kept up its total team dominance by beating Neodesha 45-0. The Dragons are 5-0 and have outscored opponents 175-28.

Halstead took care of business against Hesston 46-6. Halstead is 5-0.

The Eisenhower Tigers won for the second week (4-1) in a row as they beat Arkansas City 19-0. Jordan Vincent, a senior wide receiver, also contributed again with another 100-yard game; it’s his second game of the season.

Wichita East and Salina Central both won their third straight games this week, they both move to 3-2.

Bishop Carroll rebounded from its shutout at Carroll to beat Great Bend 28-14.