When it comes to players who excel on both sides of the line of scrimmage, Ell-Saline’s Luke Parks, a senior running back and outside linebacker, is one to keep an eye out for.

Parks was named second team all-Heart of America League at running back last season and first team all- league on defense. On defense last season, he led the Cardinals in solo and assisted tackles with 52 solo and 33 assisted tackles. He also had three forced fumbles and four fumbles recovered. On offense, Parks led the team with 972 all-purpose yards, 545 yards rushing, 280 yards receiving and 11 touchdowns.

Parks is known to be a tough player who works hard in the weight room. His coach, Terry King said that he is not your average high school weightlifter. He said he works all the areas that are important to his game, which contributes to his success on the field as a two-way player.

“He works for speed, agility, and quickness, he does a lot of things,” King said. “He’s not a very big kid but if you take a look at him, he looks very good. He runs the ball and tackles well.” 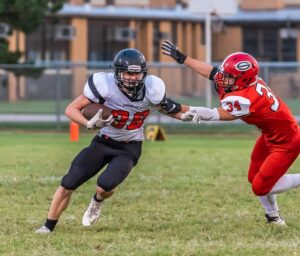 Ell-Saline’s Luke Parks (left) looks to cut up field during a game last season against Sedgwick.

Parks is also a well-driven player that sets many goals. One of the goals that Parks has for himself is improving the amount of tackles he has at the end of the season.

Parks said that he hasn’t known any different when it comes to playing on both sides of the line of scrimmage. He said he has played both ways since before middle school.

“I enjoy it because of downtime, and you get good experiences of the game on both sides of the ball,” Parks said. “I’ve done it for my whole football career.”

Parks is a two-sport athlete. He also runs track in the spring. King said that the overall work that Parks puts into the weight room, and on the field, is a player that many of his teammates look up to. He also said that getting in the weight room to be successful in the Ell-Saline area has been a struggle lately for many of his players due to working on the farm or being away.

“I think that his team kind of idolizes the way he plays football,” King said. “Right now, we kind of struggle to get kids in the weight room. It’s kind of a hard sell to get kids committed anymore. I think the kids that want to play football look up to him.”

Despite his success on the football field, Parks will not be playing football after he graduates. He will instead be enlisting in the military. He said he hopes that his last year on the field will reflect his team’s hard work, and the friendships he’s made.

“This year I want to get deep into the playoffs, compete with better teams in the state,” Parks said.