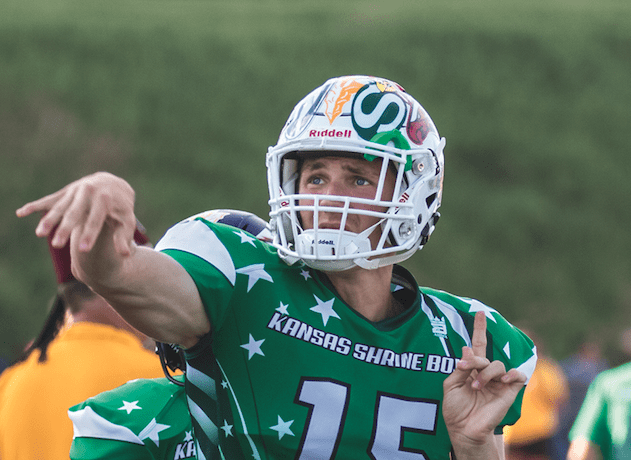 USE THIS COUPON TO SAVE $5 ON YOUR NEXT PICKUP ORDER, VALID THRU 10/31

First, the Shrine Bowl was played in a different city for the first time – Dodge City. Second, the game was played in early June rather than late in the summer.

The changes didn’t alter the enthusiasm for the game, which the West won 26-7 over the East.

Several VYPE-area players participated and had outstanding performances for the West. Maize quarterback Caleb Grill flung two touchdown passes, including one to Valley Center’s Larry Wilson for 22 yards in the second quarter. Grill, who will attend Iowa State and play basketball for the Cyclones, finished completing 5 of 11 pass for 91 yards. 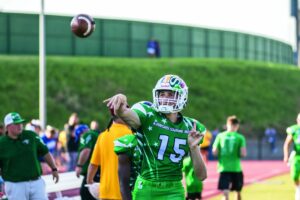 West quarterback Caleb Grill, who graduated from Maize, warms up before the Shrine Bowl in Dodge City. Grill was named the Most Valuable Player for the victorious West team.

Ell-Saline’s Nick Davenport led the West defensively with eight tackles. He also forced a fumble and recovered a fumble while adding a quarterback sack.

Grill was named the West’s Most Valuable Player, the first MVP ever from Maize.

Wellington had its first Shrine Bowl player in 16 years, as De’Andre Washington played on the West’s defense and recorded two tackles.

The 2020 Shrine Bowl will be played July 18 at Yager Stadium in Topeka, on the Washburn University campus.