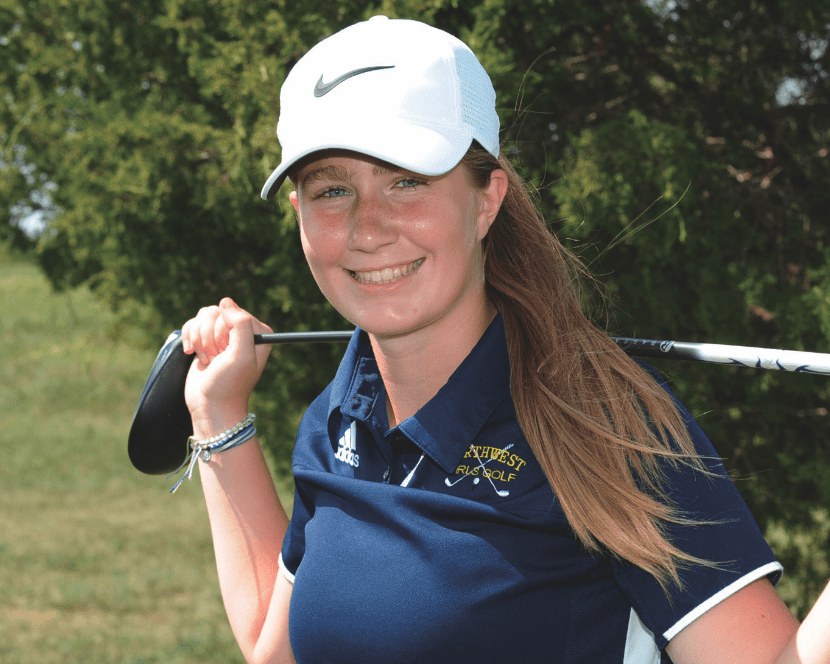 ONE MORE ROUND FOR HOOPES: Reigning City League champ looks for strong end to senior season

“While I didn’t start until 11 or 12 with junior golf, I’d gone out and watched my dad play,” she said. “He would let me hit some shots or go watch him play. He’d take me out for junior golf, and it was fun for us to do. He’s an accountant, so he’s pretty busy. I didn’t get to see him much, so to go out with him on a Saturday and play with him was a fun thing to do.”

For Arthur Hoopes, spending that time with his daughter meant so much.

“My grandpa had taken me out when I was younger, and it meant a lot to me,” he said. “… We’ve always enjoyed the time together, and now that she can beat me all the time, it’s not as much fun.”

He paused to chuckle. 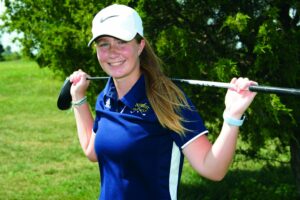 Parker Hoopes, who is the defending City League champion, has learned much of golf’s mental game from her dad.

“He wanted to make sure I knew the rules and what to do with my swing,” Hoopes said. “One of the best things about my dad is he’s patient. I’ve gotten to the point where I can beat him, but he let me think through shots and be as good as I want to be. He’s been a great help to me, and he’ll notice things.”

Hoopes’ strength is her length off the tee.

“… We play in a league where Kapaun (Mount Carmel) is your go-to team every year. Parker has moved up that totem pole of talent every year since she was a freshman.”

The primary reason she continues to improve is her focus. While she has no intention of playing golf in college, she puts in the work year round.

Soccer is Hoopes’ No. 1 sport, though. It always has been.

“I think soccer helps me in golf with being in shape and being more flexible,” Hoopes said. “The mental aspect, they kind of coincide. You’re running 90 minutes in soccer, and it’s hard to keep going. In golf, if you have a bad round, you don’t want to keep going but you have to.”

Madison Slayton’s goal since she was a little girl has been to earn a Division I scholarship. She did just that, committing to play golf at Wichita State.

“Being able to make that goal a reality is just awesome,” Slayton said.

But before she heads to college, Slayton is set on challenging for an individual title and winning a Class 5A team title.

Slayton won a 4A title with Wichita Trinity Academy in 2016, and she finished third individually in 2017 and 2018.

Slayton transferred to Andover second semester of her junior year and will compete for the Trojans. Slayton attended Andover schools through middle school.

“I think it’s a better fit for me,” she said. “It’s like returning home, that’s how I feel. It’s super comforting that I know everyone that goes to school there. It’s not like I was hopping into a new experience.”

Andover won every tournament the past two years – except the Class 5A competition. St. Thomas Aquinas finished first in 2017 and 2018.

“The expectation this year is to win each and every tournament and finally get the big one at the end,” coach Ryan Harshaw said. “It’s definitely a motivation. Two years ago when we got second, this junior class was freshmen. They were new to the environment…. They had more experience going into state last year, and we got closer.”

Andover is led by seniors Kelsey Hawley and Slayton, as well as juniors Olivia Nguyen and Tiffany Chan, who won the 5A individual title.

Chan will be challenged by her own teammates with the Kansas State High School Activities Association’s move to a two-day, 36-hole tournament.

“Tiffany is a really good player, really consistent,” Harshaw said. “She doesn’t just wow people. She keeps it in play with a really good short game. Tiffany’s a girl that we can consistently count on.”

But it has had an effect.

“I want to get out and golf with more people,” Chan said. “We want to win that team title really bad. We’ve been winning every single tournament but coming up short on state. That’s our drive.”

Chan said she has added 20-plus yards to her long game.

“She’s a grinder. She’s a hard worker,” Harshaw said. “… Kelsey has been solid for us, and she’s played varsity all four years. She’s working on her swing, and she has a really good short game.”

Andale senior Morgan Brasser, who finished second two straight years in 4A, is back. And she wants that individual title.

“It’s something that I’ve dreamed of ever since I heard about it in sixth, seventh grade,” said Brasser, who finished third her freshman season. “I’ve been working hard at it. It will take hard work.”

Brasser is working on a swing change, an incredibly frustrating process.

“It’s starting to help me,” she said. “I’m looking forward to seeing how it helps me and pays off this season. It takes a lot of practice, muscle memory, repetition to get it down.”

Andale returns all but Jacy Anderson, who graduated in May, after the team took second in 4A. Junior Jaela Albers, who tied for 10th, is back, too.

“We have a really strong returning team,”Brasser said. “I’ve got to step up this year as a leader. I’m pushing my teammates to do the best they can.”