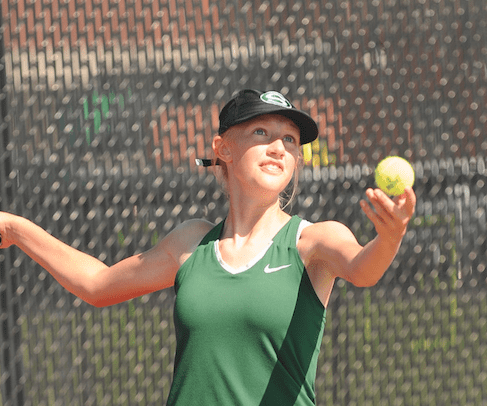 A Hotbed Of Tennis: Salina has state contenders at all three schools

The fall of 2018 was a good one for Salina girls tennis.

It’s a close-knit tennis community,” Stuart said. “We want to see all three schools do well.” 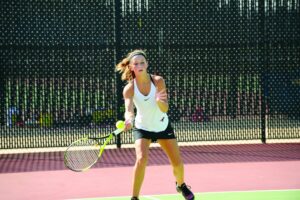 Salina Central has a strong boys program – the Mustangs’ title in 2019 was its 12th, and they have won eight since 2004.

“It’s pretty mind-boggling,” said Goll, who took over the girls program in 2006 and the boys in 2012. “… We’ve been fortunate to be successful for a number of years.

Central’s top players are junior Callie Sanborn, who was seventh in 5A and Emery Newton, who was 12th. They opened their season at 7-0 and 12-0.

“We have four pretty solid singles players, and they pound on each other every day,” Goll said. “… Callie and Emery can frustrate people. Callie is an outstanding soccer player, and she can run all day. Emery is small in stature, but she’s got some punch in her shots. Fundamentally, she has a very solid game.”

In early September, six players were competing for four doubles spots — seniors Sydney Sorell and Molly Michaelis were in the No. 1 doubles spot. Camryn Phelps and Regan Geihsler were state qualifiers in 2018. 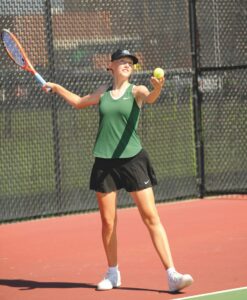 Salina South is improving. The Cougars have had a state qualifier in 11 of the past 12 years in coach Ryan Stuart’s 13 seasons.

But the season before he took over, there were only seven girls on the tennis team. In his first year, he had 20.

“Obviously that hurts,” Stuart said. “We were ranked second in the preseason rankings. Her injury put our plans in turmoil, but we have a talented group of people jockeying for the right spot.”

The Cougars have 24 out for tennis. In their first tournament, a duals tourney, Stuart relied on a a variety of players. Sophomore Laura Brucker and freshmen Tess Daily and Katen Putman were part of the 10 involved in the tourney. Junior Lizzy Franco and senior Kati Rivera are playing No. 2 doubles.

Nunemaker and Armbrust won doubles at the tournament on Sept. 7 to improve to 7-0. 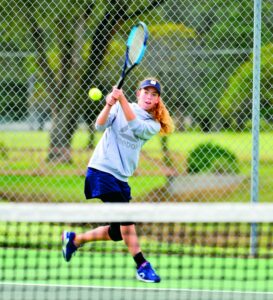 Perrin, in his third season as the boys and girls tennis coach at Sacred Heart, said the Knights have had some peaks and valleys.

“It’s been cyclical,” Perrin said. “I feel like we’re on a pretty good trajectory right now. We have 17 girls out for a really small school. I don’t talk about wins and losses. We use every practice to improve.

Increasing the number of athletes out for tennis has been Perrin’s focus.

It helps to have talent in his top two singles spots.

“Lily really loves to play,” Perrin said. “She plays a lot and doesn’t really ever tire of tennis…. She’s gotten a more well-rounded game over the years. A lot of it is she competes. Isabella is a good, steady groundstroker. She’s very poised in general.”