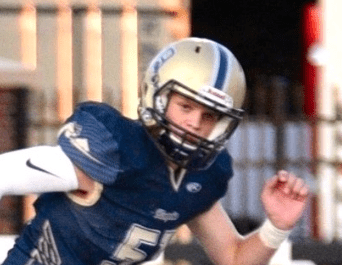 Sacred Heart junior Mason Richards grew up watching his brother play sports and knew that he was bound to follow in his footsteps.

“When I was little, our family traveled throughout Kansas to watch my older brother Tate play sports and I instantly knew that someday I wanted to be the one playing,” he said.

Now, Richards plays football, basketball, and baseball at Sacred Heart, where he says his favorite thing about it is being a part of a team and building relationships with his teammates and coaches. It is this bond that he strives to honor when on the field or the court. He wants to make those around him proud.

“Doing my best in athletics is important to me because I don’t want to let my teammates down,” he said. “They, along with my family, are very supportive and this motivates me to be the best person and student-athlete I can be.”

One thing that stands out to Richards that illustrates the camaraderie between he and his teammates is the pregame locker room rituals before football games that get everyone ready to play. 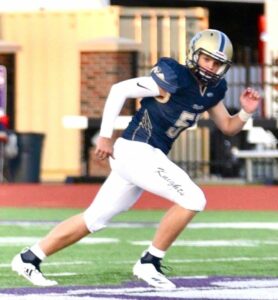 In addition to the teammates, fellow students, and coaches who make up his support system, Richards credits his family with always being his number one fans and role models.

“My dad and my oldest brother are two people I admire most,” he said. “They taught me how to play sports and have taken me to numerous sporting events over the years. As a family, we’ve spent countless hours playing pickup games in the front yard and bonding over sports. My dad has always encouraged my brothers and I to carry ourselves in a positive manner on and off the field, regardless of wins or losses.”

Outside the realm of athletics, Richards says he enjoys his high school because of the smaller class sizes and a community atmosphere.

“I like getting to know all of the students and teachers by name,” he said.

He also volunteers for Prayer and Action, Relay for Life, and at his church, St. Elizabeth Ann Seaton, while maintaining a landscaping job in the summer. After high school, Richards would love to continue his athletic career in college.