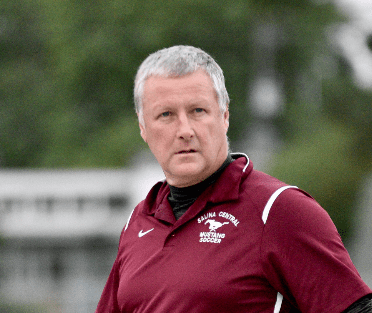 Before Dave Ouderkirk graduated from Smith Center High School, he played a variety of sports – football, cross country, basketball, and golf – but ironically, he didn’t play the sport he now coaches at Salina Central. He always had a heart for coaching, but it was his children who opened the door for him to choose soccer.

“I always wanted to coach, it was something that I had in the back of my mind from a very young age,” said Ouderkirk. “When my kids were young and took up soccer and they were looking for a coach I jumped at the chance, and from there just fell in love with the game and started studying it. Soccer pulled me in because of how fast moving it is.”

Ouderkirk admired the success of Salina Central’s soccer program so when the chance to coach was presented, it was an easy choice.

“Salina Central always had a great soccer program and I really wanted to see if I could continue their tradition and even build on it,” he said. 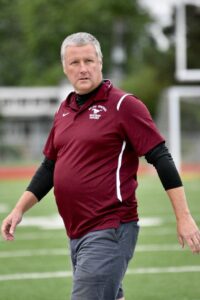 Ouderkirk says this year has given many players on the team an opportunity to step up and fill leadership roles.

“The team this year is a combination of experience with youth,” he said. “We will be replacing several key players and so I am looking for this team to grow and step up to the new roles that will be expected of several players.”

The Central Mustangs have risen to the task this season and Ouderkirk is proud of their progress.

“The amazing thing about this team has been their attitude every day at practice, they bring good work ethic and are very coachable,” said Ouderkirk. “We are 11 games in now and are definitely playing better soccer now than at the start of the season.”

Ouderkirk’s hope for his team is that each of the players will not only hone their skills, but also learn how to work hard and be a leader – traits that they will carry with them the rest of their lives.

“I want them to grow as players, and that means making their skills better, but at the 5A varsity level it also means understanding how hard you have to work and being good leaders,” he said. 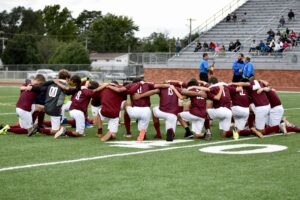