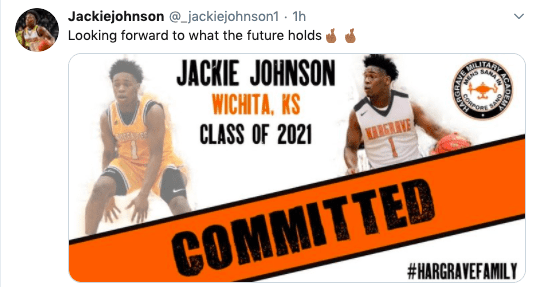 Southeast senior Jackie Johnson announced Thursday that he is transferring to Hargrave Military Academy in Virginia.

“My main goal is to get to the league,” Johnson said of the NBA. “This is one step closer to the goal.”

Johnson has offers from Eastern Washington, Coastal Carolina and Montana State. This transfer will increase his visibility among college programs.

“It will definitely help me get more offers,” he said. “Put me more on the radar in general…. I feel like their style is an uptempo style, and I want to get out and run, too. It will really improve my overall game.”

Korleone Young, who played three years at Wichita East, transferred to Hargrave for his senior season, as well. The Detroit Pistons drafted him out of high school in the second round of the 1998 NBA Draft.

Johnson, who is an outstanding guard and can seemingly do it all, played two years at Southeast after transferring from North.

His offensive game is diverse, with the ability to hit consistently from three-point range, while also using his speed to get past defenders and score at the rim.