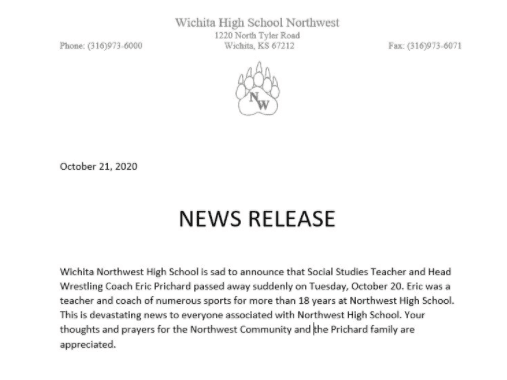 “We’re going to miss him dearly, and I’ll miss him as a friend, as well,” Grizzlies football coach Steve Martin said.

“It’s a tough one. Over the past couple years, his health deteriorated a little bit. He had a stroke about a year and a half ago. It’s just a bad deal.”

Senior Camden Aldrich was stunned when he got the news about Prichard.

“He meant a lot to me,” Aldrich said. “He believed in me. He was always there for me, even at my lowest point in wrestling.

While Prichard had plenty of success with the wrestling program, he was someone people genuinely enjoyed being around.

“No. 1, he always seemed to be the life of the room wherever he was,” Martin said. “He could take any situation and turn it into a fun, joking environment. He was just always a positive guy.”

Martin noted that Prichard was also a huge advocate for his students and wrestlers.

“Watching him interact with kids, he was always positive, even positive with other teams’ kids, too, at wrestling tournaments,” Martin said.

The upcoming wrestling season will be tough.

“It will be a lot different,” Aldrich said. “We’ll try to make the season for him and about him, and do the best we can for him.”