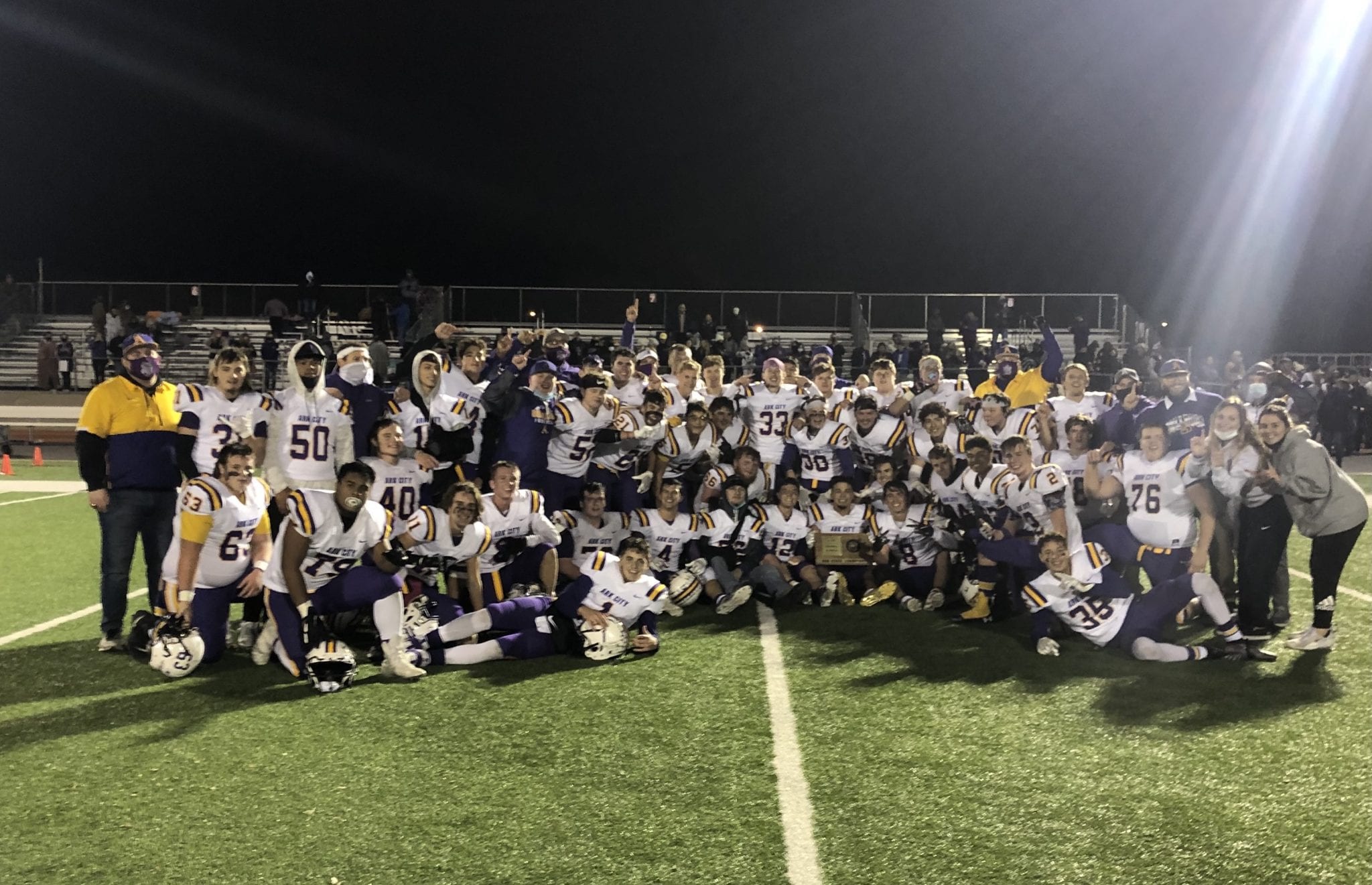 But in the moments after Devon Watkins sealed the victory with his interception with 2.5 seconds to go and the Bulldogs holding onto a 28-27 lead, Wiemers was more concerned about keeping his team off the field to avoid a penalty.

After all, there was still one more play.

“You kind of have to be the one person in that moment that is still keeping their head a little bit,” Wiemers said. “I wanted to do what everyone else was doing, but I needed to get it all in order at that point.”

It was the third straight week that Ark City used its defense to win. The Bulldogs beat Andover Central with a goal-line stand, then stopped Wamego’s attempt to go ahead on a two-point conversion.

Wiemers got his chance a little later to celebrate the moment when he found his wife, Sandy, and the emotions boiled over.

“It was fairly emotional,” said Wiemers, who is in his second stint with Ark City. “I’m not a big crier, but I was pretty close. She was (crying), though.

“She knows how much work I’ve put into this and how much I’ve invested into it. That’s what most don’t understand — you sacrifice a lot of your time for other people’s kids, and I love to do it. I get to wake up every day and do this every day. It was kind of the moment where everything hit me.”

That Ark City has a shot at winning a 4A title is stunning.

The Bulldogs were 2-6 after the regular season.

Sure, it’s not easy playing in the AV-CTL II. And there were close games against Valley Center and Salina Central — Ark City lost to both by six points. And the Bulldogs have 40 players, with most going both ways, while other teams double their overall numbers and are able to platoon.

But 2-6 just doesn’t advance to the state title game. No matter how close those losses were.

And then you take into account years and years of mediocre — or worse — seasons.

“From our first year here until now, our big thing is accepting responsibility for where you’re at,” Wiemers said. “‘You’ve been a terrible football program. Let’s accept that. Now, how do we fix that?'”

It comes back to that responsibility that Wiemers mentioned.

“Instill in their minds, you can control your attitude and your effort,” he said. “That’s non-negotiable in our program — good attitude, good effort. There’s also a discipline factor that I think we were missing.

Wiemers credits his seven seniors with the buy-in.

“They’re an unbelievable group of kids,” he said. “They do everything right. They’re the big brothers in the family. They will tell them when they’re not doing what we want them to do.

“Those kids do everything right all the time — off the field and on the field. We got back (Friday from McPherson) at 12:30 a.m., and they’re up at 9, hanging Christmas lights for our athletic trainer. They’re just that type of people.”

Coaching is in Wiemers’ blood.

His dad, Larry, was the Clay Center coach for more than 25 years. His brother, Dave, was the Emporia State coach for six seasons and was an assistant at Pittsburg State from 2011-2019. His sister, Susie Fritz, has been Kansas State’s volleyball coach since 2001.

Wiemers’ route back to Ark City was circuitous.

But after the 2016 season at SEMO, he got a call from Ark City athletic director Aaron Bucher, whose son, Owen, is a senior for the Bulldogs

“I saw what he did before and how he had an impact on those guys, how he was changing our culture,” Bucher said. “It’s no different than what all of our coaches are doing.

“… Things don’t really come easy for Ark City sometimes. It’s not something that everybody can coach in this town. He’s hard-nosed and he’s a lot like our community, and he fits right in.”

But as much as a coach and the players can do things right, there’s still the fact that Ark City has had minimal football success for decades.

That’s where the players come in. Ark City’s got talent.

They’re a set of talented leaders.

Wiemers called Shannon and Brooks, who play offensive and defensive line, the “two rocks of our program.”

“They’re not the ones who will stand out as far as catching the ball and the flashy stuff, but they’re both really gritty kids,” Wiemers said.

A trio of sophomores have also been critical — running back Wyatt Bahm, quarterback Gabe Welch and receiver Cadon Clark.

Welch has thrown for around 2,300 yards, mostly to O’Toole, junior Lucas Barnes and Clark.

“Gabe started as a freshman in Game 3 last year,” Wiemers said. “And his development has been unbelievable. We get to watch him grow up every week. He’s running everything right now.”

As for Bahm, his growth has been faster than expected.

“He has exceeded expectations on both sides of the ball,” Wiemers said. “I really kind of saw it first on defense that he could help us right away. On offense, I knew he would eventually — but he’s been awesome.”

Bahm is a wrestler — like most of his family members — and that has helped his ability to tackle. As a running back, he’s elusive and it’s virtually impossible to bring him down with a one-leg tackle.

“The run he had the other night, it was like in his mind, no one was catching him,” Wiemers said. “He was going to get that touchdown with sheer determination.”

The Bulldogs have their sights specifically on the 4A title, which would be their first football championship since 1979.

“The thing I like about this community is there’s a little bit of a chip on everybody’s shoulder,” Wiemers said. “We’re kind of down here by ourselves. These kids come from blue-collar families. They’re tough kids.

“When you can get them together and get them believing in one thing — our kids aren’t scared of anything. We’ll go play anybody and w’ere not scared. We’ll throw everything out there.”