For 17 years, coach Corey Jones has been working to bring a Class 5A softball title to Valley Center.

“You never know just how sweet it us until you get there and you do it, and it finally sinks in,” he said. “It’s a great feeling for the school, the community, the girls, the coaches, for everybody that has worked hard to get there.”

Valley Center’s win over Basehor-Linwood was also historic — it was the Hornets’ second girls state title and first since track won in 1978.

“This was also the 50th anniversary of Title IX, so it was even better that we pulled it off,” junior Maci George said.

The utter excitement experienced after the win was matched by the thrilling way Valley Center won.

The Hornets, led by eight junior starters and a sophomore starter, were making their seventh trip to the state tournament. They finished third in 2018, the only other time they had advanced to the semifinals.

After beating Spring Hill in the quarterfinals, the Hornets were relieved

“That took the pressure off us,” Jones said. “I told the team, ‘hey, we get two more games to show people what we can do.”

Then George came up with a grand slam to put Valley Center over the top in the semifinal.

“After that, we never looked back,” Jones said.

Valley Center played Basehor-Linwood in the title game, the same team that sent the Hornets home in 2020 on a walkoff in the bottom of the seventh inning.

It was 1-1 and in the eighth inning when George came back up to the plate and gave the Hornets their first title by hitting a three-run homer.

“I saw the pitch — a screwball — come out of her hand and my eyes lit up,” George said. “It’s my favorite pitch to hit. I was ready to hit.

“It was absolutely insane. I’m running the bases, looking at the crowd. My teammates are coming out of the dugout…”

Jones has replayed that moment many times over the past week.

“It was hit in the gap and we had runners on first and second with two outs,” he said. “Lucy Hooper, one of our fastest runners was on second. I looked to see what kind of jump she got, and I knew we were going to get two on that. That split second, I saw she got a great jump, so even if the ball hits the fence and drops, we’ve got two runs.

“When it cleared the fence, it was incredible. The girls at home plate were waiting for her to get there.

“You couldn’t write a better script.”

The Hornets (23-2) had two losses early in the season to Derby and Newton.

There’s little doubt that there will be a target on Valley Center in 2023. The Hornets have started the same lineup for the past two years — and these juniors, Jones said, would have started in 2020 as freshmen if Covid-19 hadn’t wiped out the season.

“We had two girls with 11 wins each,” Jones said. “That’s pretty phenomenal.” 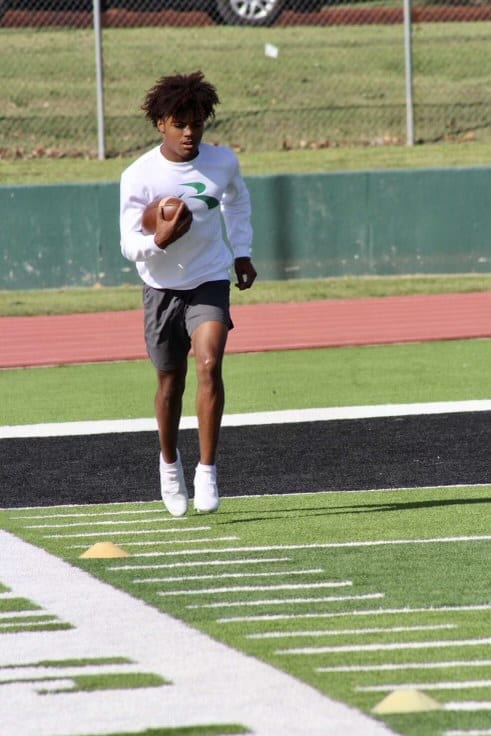 By Joanna Chadwick Minnesota is the latest college to offer Derby junior running back Dylan Edwards, who also has offers from Iowa State, Kansas, Kansas...